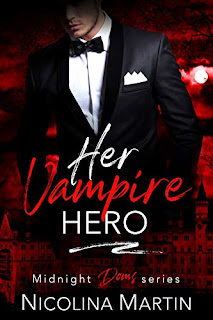 Book Description
Don’t go looking for the monsters in the shadows.
They will find you.
The young doctor in the ER thought she saved my life. I repaid her kindness by stealing her away from everything she knew.
I fought the devil in me, but I have lived too long, and am too lonely to deprive myself of her.
She will be my perfect submissive. My pet. My true north.
Katarina Donovan was good and pure, and so, so human. And then she met me.
My Review
Lou is brought to the hospital and Katarina thinks he's dead until his pulse sparks up and then she's all in and wants to make sure he makes a full recovery. Lou should have let her think he was dead and then slipped out quietly instead of letting her help him back to 'life'. He's a vampire so all he had to do was erase himself from their memories but instead he jumps out the window and disappears after he's healed enough to do so.
Katarina couldn't stop thinking about him after he disappeared. She is having a hard time sleeping or doing her job because her thoughts keep coming back to him and she's sad that she'll probably never see him again.
He finds her in the parking garage and he pleads with her to forget him but she won't and then he does what he never thought he would do...he leaves a human with the memories of him and now she knows he's a vampire. He promises her that if she tells anyone that he will come back. But then he leaves her and she dreams about him. He probably would have left her alone if she hadn't been attacked. He comes to her rescue and saves her life and he knows he can't let her go.
It was heartbreaking to see how lonely and sad they both were. As she heals from her attack, they get to know one another better and can see that there's an attraction there between them even though he's a vampire. But he all but kidnaps her and tells her that she can never go back to her life. I had high hopes for this book but it was my least favorite so far from this series. I didn't like how he treated her and I didn't like how Katarina, a doctor just became this meek little pushover that let him do whatever he wanted and didn't treat her right at times.
The Midnight Doms series is part of a multi author series but for the most part can be read as standalone books. I am reading this series completely out of order and haven't felt lost at all.
I give this book 3 out of 5 stars.
Posted by Mary Kirkland at 12:00 AM 20 comments