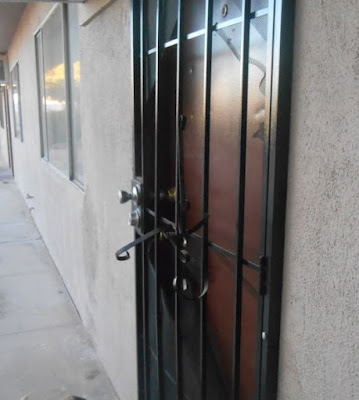 Last month the guy in this apartment was evicted. He hadn't paid rent in over a month according to the shouting match I heard between him and the apartment manager and he was given a 5 day pay or quit notice. He didn't pay so the constable came and locked him out. 2 days later  he came back with a U-Haul truck and the manager gave him the key to the apartment so he could move his stuff out. I didn't see the manager come by at all that day and check on him and at 5pm the manager left for the day while this guy was still moving his things out. Well sometime later that night the guy that was evicted must have done this to his security door right before he left. He mangled it pretty good and even tore the screen material behind it. 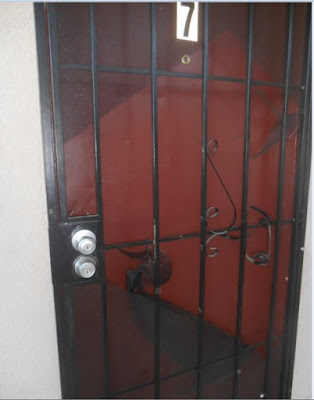 It's in our leases that anything we install in or outside of our apartments are not to be removed when we move out. That includes security doors, ceiling fans, shelving, vanity mirrors or lights. Most people take all that stuff with them anyway but for whatever reason this guy didn't but he did mess it up pretty good so no one else could use it. 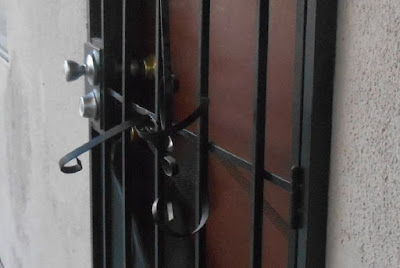 Here's a close up of the metal all bent outward and the screen torn. I'm sure they'll have to remove the security door before they re-rent the apartment now. I think the guy was pretty pissed off to do something like this.

A few days ago at 10pm right after we had gone to bed we heard some woman screaming. We both up to look out the window and saw a woman running down the sidewalk in front of our window. Her boyfriend was screaming at her and then all of the sudden she ran back the other way with a cop chasing her. They all got back to her car where the police put her boyfriend in handcuffs and kept yelling at her to back off or she would get arrested too. The fire truck and ambulance showed up but soon after left and then the police left with the guy they arrested. I tried taking pictures but as you know my camera doesn't take good pictures at night. I even tried to use my Kindle and that didn't work either.

This week 2 cars were stolen from out alley and 2 cars were broken into. So the manager said that her boss approved surveillance cameras that Metro can monitor for illegal activity. But there's only going to be 4 cameras. No idea when they're being installed.

The manager also asked us if any of the other apartments in this courtyard have drug activity going on. So we told her that one does and she even saw some of it when she was in a vacant apartment watching that apartment for an hour. So she sent them a warning letter telling them that if she kept seeing it, they would get a 30 day notice. The guy who lives there with his girlfriend was so pissed off that he went down to the office, got in the managers face and told her off. So the manager told the girlfriend that he's not on the lease, if she wants to stay she has to kick him out or they're both gone. What a dumbass! #DontPissOffTheManager

And the manager gave us her cell phone number and told us to call her if we see any more drug dealing going on. Maybe we really will have a quiet courtyard.