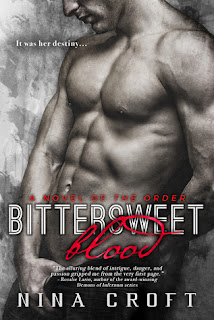 Tara Collins just wants to be normal. Everyone else wants her dead.
Tara's eccentric aunt raised her to be fearful of the world and follow the rules. But after her aunt's death, Tara is ready to take control and experience life for the first time. But she quickly discovers that everything she's been told is a web of lies. Determined to solve the mystery of who she is truly, she hires a private investigator to help her uncover the truth.

Christian Roth is more than your average PI. A vampire and ex-demon hunter, Christian lives among the humans, trying to be "normal." But recently, things seem to be falling apart. There's a crazed demon hell-bent on revenge hunting him down, and a fae assassin on the loose with an unknown target. And the Order he abandoned desperately needs his help.

As the secrets of Tara's past collide with the problems in Christian's present, she finds herself fighting her attraction to the dark and mysterious investigator. Falling in love does not fit into her plans at all, but Tara soon learns that some rules are meant to be broken.

Tara was raised by her very eccentric aunt and when her aunt dies she does exactly what her aunt always told her not to do...she starts looking into the past and breaking her aunt's strange rules. Tara hires Christian Roth to find out who she really is but Christian is more than just a PI, he's also a vampire and now he has his sights set on Tara.

Christian Roth is old and he has a lot of enemies, one enemy is going to bring the fight to him and anyone he cares about is in danger. Christian doesn't realize that by caring for Tara he's put her in danger, not until the threat hits really close to Tara and turns her world upside down.

This book has one twist after another along with just about every paranormal creature you can imagine. Demons, fae, werewolves and vampires are just a few of the paranormal creatures that seem to be in all of the books in this series. This is the first book in the series but I read them out of order so I already know that there are more supernatural creatures to come.

Tara was unique in that she was sweet, innocent and likable but she was also no pushover and when she knew something had to be done, she did it. Christian and Tara made a great couple, they just fit together. The romance was hot, like lava hot. The action was bloody and even though some of it happened and we didn't get an up close look while it was happening we did get to see the aftermath and it was gruesome. But then when you're dealing with demons you have to expect a little gore.

I was quite happy the way this book ended and never saw some of the outcomes and twists coming. There were a few surprises along the way and I really liked that. This series has been one of my favorites so far this year. I can't recommend it highly enough.