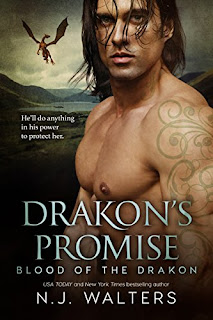 Darius Varkas is a drakon. He's neither human nor dragon.

He's also the target of an ancient order who want to capture all drakons for their blood. When fresh, a drakon's blood can cure any illness and prolong a human's life, and the Knights will stop at nothing to get it.

When librarian Sarah Anderson stumbles across a rare book belonging to the Knights of the Dragon, she's quickly thrust into a dangerous world of secrets and shifters and things she never would have believed possible. When the Knights realize Sarah has a secret of her own, she becomes just as much a target as Darius. Her scary dragon shifter just might be her best chance at survival.

Drakon's are half human, half dragon. Their blood can cure any illness so the crazy Knights want as much of the Drakon blood as they can get and will stop at nothing to capture them.

Darius is around 4000 years old as are his brothers. The Dragon Knights organization have been around for just about as long and have been after the Drakon's blood so Darius and his brothers have been in hiding most of that time trying to keep themselves safe from the Knights.

Sarah finds a book that might belong to the Knights which puts her right in the path of danger. But she risks her life to save a man she's never met and Darius finds himself very attracted to her when they meet. Now that they're both in danger from the Knights of the Dragon, they go on the run and try to stay one step ahead of the bad guys that are after them.

They are running for their lives and getting help from Darius's brothers but are also getting to know one another and getting really close. I really liked these two together and how much of an alpha male Darius is. We get quite a lot of world building as well as back story as to how the Drakon's came about and I liked that.

This is the first book in a 6 book series with what I'm guessing will be a continuing plot line that will probably follow throughout the series since this one ended with a glimpse of what will happen in the next book. This book ended on a cliffhanger and with them still on the run from the Knights. I didn't like that aspect of the book but for the most part the book did wrap up the rest of their story. I liked this first book so I'm willing to look past this cliffhanger and read the next book, hoping that the next one does not leave a lot of holes open in the end.