Back in February I heard some really loud banging and looked outside to see 2 cops banging on my neighbors door. I quickly got my camera and started recording. But since I'm not used to taking a lot of video, I made the mistake of holding my camera side ways. Hence the side ways video. smh

But you can definitely hear what's going on and see what the police are doing. And yes, I took the video through my screen door because I'm not getting in the middle of that!

So someone had called the police and said they heard the kids in that apartment crying for over an hour and no one was answering the door. The police showed up, knocked on the door and kept yelling that they weren't leaving until they knew that the kids were ok because you can plainly hear the kids crying and screaming before the police kick the door in. The police pried the window open just enough to shine a flashlight inside and see the father passed out on the couch and he didn't wake up when they banged on the door. I later heard one of the officers on the phone telling someone that they saw him on the couch with a pill bottle on the table next to him and they didn't know if he was breathing so they kicked the door in.

The ambulance came and checked out the dad and the kids and no one was arrested but since he was the only one home shouldn't he have been arrested for child neglect or something? Nope, the police just left. These are the same parents that let their kids out by themselves and have their cousins living in the apartment directly across from them. I have no idea where the mother was. The man they brought out was the dad who had been passed out on the couch. 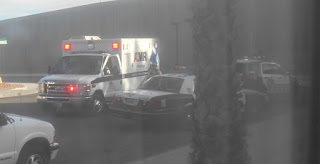 Police and ambulance showed up for this one. 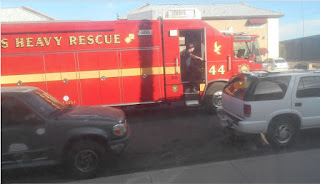 The fire truck came as well.

This is one of the families that had kids that I was having a problem with but they moved out this week!