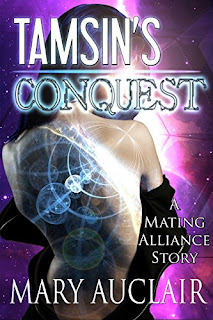 In a far future, where Earth is nothing but a vast desert and what’s left of humanity lives in a world where the strong prey on the weak, headstrong Tamsin is in deep trouble for stealing water rations. Hunted down, she has no choice but to seek refuge inside the Agency, Earth’s interspecies marital organization.

What the Agency doesn’t know is Tamsin has no intention of going through with the match-making—she’ll flee first chance she gets.

Tamsin’s plans are foiled when she’s brought to planet Havlan, home of the Tellurian warriors, where she’s Claimed by a tall, golden warrior determined to make her his lifelong mate. Tamsin fights hard first to escape, then harder still to resist the powerful attraction she feels to the alien King Jareth. And yet the hardest battle of all is not against the ruthless traitors set on seizing Jareth’s kingdom, but against losing herself to an all-consuming love.

Reader Advisory: This story has graphic sexual language and scenes—no closed bedroom doors (or other rooms) here, as well as some mild spanking.

Tamsin was on the run from a family that she stole from. So she did the only thing that occurred to her, she went to the agency that set up human females with alien males looking for females to mate with and produce children so their race don't die out. Tamsin thinks this might be her way out of trouble but before she can really make up her mind the choice is taken out of her hands because once you sign up, you aren't given a choice of backing out.

She finds herself face to face with a huge, intimidating alien warrior who claims her as his. She tried to fight him even though she finds herself attracted to him. After a while she can see that he isn't going to treat her badly and they start to get to know one another and get along really well. There's a lot of sex in this book but since he's hoping to start producing children right away, I thought it went well with the story.

There's always something in a story like this where things are going well, to make things more dramatic and trying to stop a war between the different alien races and stop someone from killing you would be that drama in this book. Havlan claimed Tamsin who was supposed to be someone else's woman, so this other guy is pretty irritated but is he the one sending people to attack them? Guess you'll have to read the book to find out.

This was a fun, quick read and I enjoyed it.