So my old laptop was freezing, was slow and I was just having problem after problem with it. So I bought a new Acer laptop and I got it yesterday. I was so happy...

Then I hooked it up, turned it on and tried getting on the internet and while I could connect to the internet, all these security certificate error pop up kept popping up at every page and with them I wasn't able to download anything. I tried downloading Google Chrome but the pop ups and certificate error messages kept me from being able to download anything. So I called my ISP- Centurylink.

I was on the phone with a Centurylink tech person for over an hour yesterday and she has me Ping this and NSlookup that and had me into little black boxes that I didn't even knew were on my computer. She told me it was a DNS server issue but after an hour she couldn't figure out what the problem was so she was going to have another tech person called me back in 24 hours.....

So today I Googled Security Certificate Error popups and found one tech guy that said to make sure that the date and time were correct on your new computer. I look down and see the date is set to 2013 and think to myself...it can't possibly be that easy, can it?

I change the date and time and restart the laptop and all the pop ups have disappeared. I was even able to download Google Chrome. Sheesh maybe I should be a tech person because the last few times I've had a computer problem, I figured it out myself by Googling the problem.
Posted by Mary Kirkland at 12:52 PM 9 comments 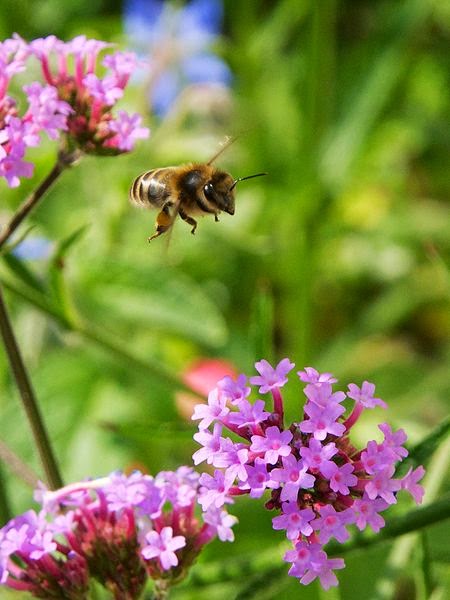 How Are The Parasitic Flies Affecting The Honey Bee?
A small adult female lands on the back of a honeybee and injects eggs into the bee's abdomen. The eggs hatch into maggots and eat the insides of the bee's....killing them.

After consuming their host, the maggots pupate, forming a hard outer shell that looks like a fat, brown grain of rice. Adult flies emerge in three to four weeks. Bee's that have been infected by the parasitic fly will leave their hives at night, which is something most bee's don't do and will gather around lights. The infected bee's also fly erratically and move in ways bee's don't usually move, much like what we think a Zombie would move.

When a honey bee usually dies they drop to the ground, curl up and die. But bee's infected with this parasite, keep trying to move, move erratically and try to fly at night which is something most honey bee's don't do.

Honey Bee Colonies On The Decline
The news agencies have been reporting how the honey bee colonies are on the decline in recent years due to a mysterious ailment called colony collapse disorder, which causes all the adult honey bees in a colony to suddenly die.

I don't know if this new threat has anything to do with the decline of the honey bee colonies or the Zombie Apocalypse but the Federal Government must think it's something to be concerned about since according to The Daily Caller, "Most believe zombies are relegated to the movies and video games, but Oklahoma Republican Sen. Tom Coburn has highlighted the Department of Homeland Security's participation in a staged "zombie apocalypse."

According to Coburn's most recent oversight report "Safety at Any Price: Assessing the Impact of Homeland Security Spending in U.S. Cities," first responders were approved grant funds for a $1,000 entry fee to a week-long HALO Counter-Terrorism Summit in San Diego where the "marquee" event was a demonstration of a "zombie apocalypse.""
Posted by Mary Kirkland at 12:00 AM 6 comments