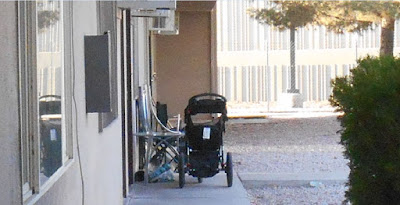 I've been playing musical chairs, table and stroller with one of my neighbors. They keep leaving all this crap on the sidewalk in front of their door so no one can walk on the sidewalk near their door and I keep moving it out in the rocks late at night. This week someone else must have got upset with this crap all being in the path of the sidewalk because they stole the folding chairs and tossed the table and other chair into the garbage. The guy that lives there started yelling at 7am that his stuff was missing and broken in the garbage. But no one came out and said they were the ones that did it. The only thing left by their door was the stroller and they finally took that back in their apartment. I don't think they'll be leaving anything else outside blocking the sidewalk anymore.