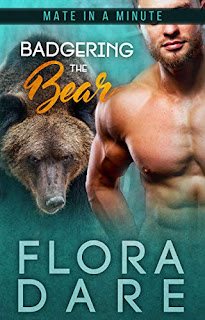 Book Description
Meet her mate in minutes? Ha! Oh, wait...look at that hottie over there...
Curvy badger shifter Jolie is nagged by her best friend to check out shifter speed dating (okay, she might have lost a bet). It's pretty boring, though, until she sees...him. Gabe is big. He's burly. And just the touch of his hand on hers sets Jolie's body aflame with need.
Insecurity sends Jolie scurrying for the cover of the forest. Good thing a bear like Gabe loves a good hunt. And what Gabe wants? Gabe takes.
The Mate in a Minute Speed Dating Agency short stories deliver a happy ending before bedtime.
My Review
Jolie is talked into going speed dating and really isn't holding out hope of anything coming from it until Gabe sits at her table. She's totally smitten with him and she doesn't know it but so is he.
Gabe goes speed dating but after being hurt in a past relationship, he's chosen to keep a few things about himself a secret.
So when the speed dating agency calls them both to let them know they're a match and they go on a second date, he doesn't tell the whole truth about himself and when Jolie finds out that he lied, it almost destroys what they could have. They are both shifters and they're both hoping to find their mates one day. Because this is a short novella, the pace was fast and things happen fast between them.
This was a short (72 page), sweet, novella that was just the right length when I only had a little time to read one night. Plus it was a great introduction to the Mate in a Minute Speed Dating Agency series.
I give this book 4 out of 5 stars.
Amazon
Posted by Mary Kirkland at 12:00 AM 27 comments