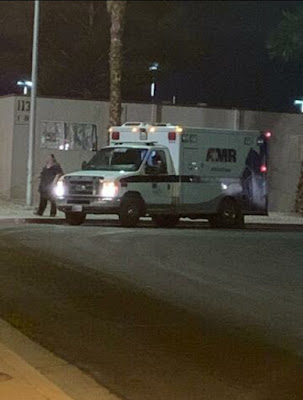 As I was walking Falcor, I saw one of my neighbors going into the ambulance. She said that the nurse who came to see her hadn't got all the glass out of her foot and she had shooting pains in her leg. I talked to her the next day and she said the doctor pulled the rest of the glass out of her foot and it was really deep in there. The nurse had left some in there. One of my neighbors actually took this picture and sent it to my daughter. All the people around here are taking pictures now. lol 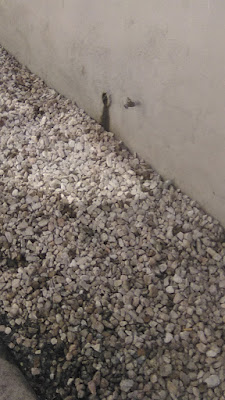 You may remember a few weeks ago I showed you how the raw sewage was leaking out all over the rocks at the end of the building in this post. Well, instead of cleaning it up or scooping out the nasty rocks that the raw sewage got all over, the maintenance guy just poured new rocks over the old ones. It looks like they fixed the leak though. But now there's a bigger pile of rocks there. They could have at least thrown away the nasty rocks first.
---- 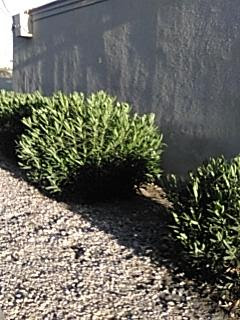 Last Sunday night I was walking Falcor by these bushes and it was already dark out. As I walked up to the bushes, three heads pop up behind the bushes and scared the crap out of me. You can kinda see that there's enough room between the bushes and the wall behind them for someone to be hiding back there. One guy says, "How you doing tonight. I replied, "I'm good, how are you?" He holds up the aluminum foil he has in his hands that he has a lighter underneath, lighting whatever drugs were in it and says, "I'll be better in a minute."
Then I noticed the needles on the ground next to the guys and how they all had drugs out and were lighting the foil they had them in. I just ignored it and kept walking. These three guys are routinely at drug dealer's apartment.
---- 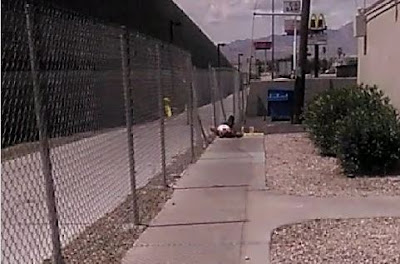 The guy from a couple of weeks ago was back out here passed out on the sidewalk like he's sunbathing poolside or something. Got too high and couldn't make it home I guess. he's fine, he woke up a little while later and walked himself home.
The high this week was 86F/30C
The low this week was 55F/12C
So that's it for this week's Apartment Hell  Life! Be sure to come back next week for more.
Posted by Mary Kirkland at 12:00 AM 40 comments