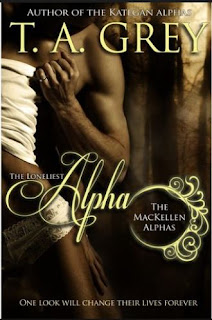 One look will change their lives forever

Lingerie designer Alicia Clarkson just had to open her stupid mouth. After defending a fellow pack mate, Alicia's been blindfolded, tied up, and carted off to the scarred cowboy alpha of the Oregon pack--Gavin MacKellen. However, the blindfold doesn't come off as Gavin reveals he's searching for a mate and he wants to keep his face hidden. Just what happened to the mysterious alpha? He talks to her from shadowy corners and behind closed doors, but when they're near an explosive magnetism draws them together. Alicia and Gavin settle on an agreement--thirty days for them to get to know each other. But Gavin knows no good woman would ever want to look at his face after the incident he suffered. One look at Alicia sends all his plans out the window. The woman's beauty has stunned him speechless. Will she be the one to stand in the face of a monster and accept him for what he is?

Buy The Loneliest Alpha to watch "a cowboy beast" get tamed by "beauty." ."

A couple of weeks ago another blogger listed books that were on sale and this one was a freebie at that time. I read the blurb and knew I had to have it so I snagged it and I'm glad that I did. It ended up being a really good read.

Gavin is the new leader of his pack and he's badly scarred so he doesn't think a mate would want him if he meets her face to face right away. So women are gathered up against their will from packs across the country and sent to meet the new alpha. This really felt like a retelling of Beauty and the Beast to me and I liked it. I did not however like the way the women are essentially kidnapped and taken to the new alpha so he can find a mate. That really pissed me off but I liked how he handled it and I understood why he felt the need to do it that way.

Alicia and another woman are picked from their pack to take to Gavin but the ones he doesn't like are going to be sent back to their packs. So Alicia just has to make sure she isn't the one that's picked. I really didn't like the way her pack treated her and the other girl that was picked to go. Their pack doesn't seem too nice at all.

Gavin's species didn't shape shift but they did have some abilities like being stronger than humans and living a long time. So Gavin asked Alicia to stay so they could get to know one another but he kept to the shadows and kept the rooms dark so she wouldn't see his scarred face. All the while they are getting to know one another there's some bad things happening in his pack and the story line that follows as they try and determine who is causing all the problems. This just adds to the story in my opinion.

They really were good together especially after he got over his fear that the scars on his face was going to scare her away. It ended up being a really good story. One of those stores that you can't put down and you have to read all the way through once you start.