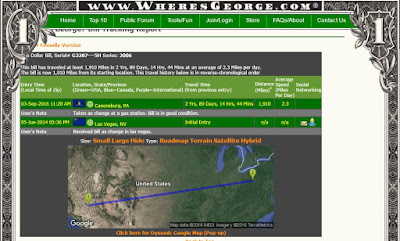 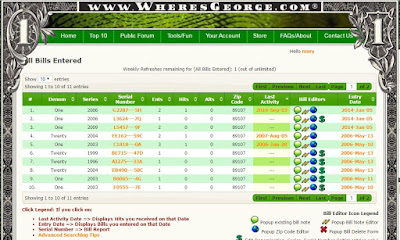 There's all kinds of info on the site about the bills I entered. All the data can be found on this page about them. How many other people have found the bills and entered into the site that they have it and where it went after they had it if someone entered the serial number into the site.

I thought it was kind cool the way people are tracking the paper money they have. The way I found out about the site was I got a few dollar bills with Where'sGeorge.com written on the paper money itself. So I went to the site to see why people were writing that on the money and added the serial numbers of the money I had so the last person who had the paper money I had just got, could see where it was now.

I thought it was kinda cool. Have you heard of this site? Have you entered any money into the site? Would you?