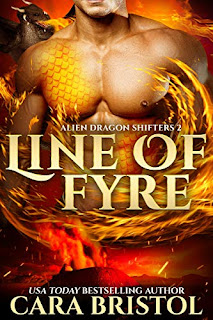 Helena Marshfield made a big mistake. But making it right puts her life in danger. She’s forced to flee and become the concubine of the Draconian prince. She never expects to be attracted to the "dragon man," and has no intention of making the relationship real.

Prince T’mar has no wish to consort with a human. Unfortunately, his father, the king, decrees he must accept her, his dragon mistakes her for their mate, and worse, the flame-haired female stirs his desires. Still, he intends to deposit her at the palace and fly away.

But when powers on Earth draw them into the line of fire, will their unexpected, unwanted burning attraction be the one thing that can save them?

Helena feels really bad about what she did to her best friend but she really had no choice. Bigg's, the guy working with her father left her no choice but she did her best to let her best friend know what was going on. Now Helena is sending herself to be a concubine for an alien prince in order to escape Bigg's grasp.

Prince T'mar doesn't want a human concubine but his father, the King left him no choice. His brother now has a human mate and seems happy enough but he doesn't even like the humans. His dragon on the other hand seems to know that their mate is close and T'mar won't give her a chance once he meets her.

Helena runs when she's threatened by someone her father works with and knows that the safest place for her is somewhere other than Earth. So she makes her way to another planet and meets with prince T'mar who she is to be a concubine for. T'mar might not like humans all that much but the more he gets to know Helena the more he likes her and when his dragon side says insists that she's their mate, he doesn't want to believe it at first.

Because T'mar already has several concubines and the people around him know of his disdain for humans so a few of his people don't treat her right when she gets there which causes real problems and a lot of drama.

Earth and Draco are at odds over who is going to get the planet Elementa which is causing all kinds of problems between the two people. Helena's father is the president and his advised, Bigg's is trying to take over which would not be good. When Helena escapes, two of her father's employee's escape with her after they are fired.

Helena is able to see Rhianna finally after betraying her (which happened in the first book) and even though things between them are strained, it's a beginning.

I really liked T'mar and Helena which I was surprised at because I had an awful picture of Helena because of what she did in the first book but now I understand she really had no choice and she did try to get a message to Rhianna so she could stop what was about to happen. So she really changed my opinion of her by the end of this book and I think she's exactly what T'mar needed. I'm really enjoying this series so far and plan to keep reading it. This book was so good. I highly recommend this series.