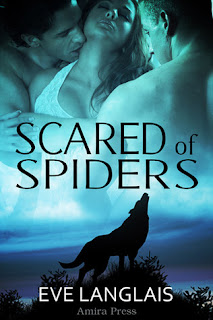 Bring on the bug spray, because to prevail, Josie’s going to have to face her greatest fear. Josie’s not a brave person, and she’s especially scared of spiders. Imagine her surprise when she finds herself attracted to not one, but two, larger than life men. Clint and Brandon both want the timid mouse who’s come to work for them—and their beasts are chafing to mark her—but when she can’t decide between them, there’s only one thing to do–share her. Before they can convince Josie that a threesome would benefit them all, they need to take care of the menace threatening their chosen mate. And when Josie confronts the bogeyman of her nightmares, she discovers an emotion stronger than fear—love.

This one hit home for me on so many different levels. The first being that Josie has been having horrible nightmares about spiders or a spider killing her in some way. Since I've had a problem with nightmares for over 30 years, this always seems like an interesting story line for me.

I'm not afraid of spiders but I am very afraid of bee's so I can understand the phobia of something like that. I really liked Josie and the fact that she has not one but two hot shifters after her. As soon as they meet her they know she is their mate. At first they don't know how to react to the knowledge that they are both a mate to her and aren't sure what they are going to do about it but they soon figure out a plan, now if they can just make Josie see that it's a great plan.

I thought it was a little far fetched that Josie didn't freak out when she finds out what they are but maybe it could happen that way, maybe.

Clint and Brandon are yummy shifters, they work well together at getting what they want and in making sure that Josie gets what she needs...in the bedroom and out of it. I really liked them both and thought that both of their personalities went well with hers.

There's some rogue wolves, a villain and a twist I didn't see coming. There's a secret that only one person knows about and the rest of the characters find out about in an interesting way. If you'd like to read this one, you can find it here.