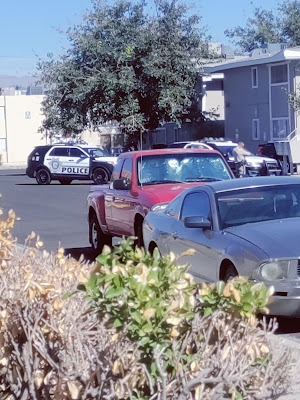 This week the police were at the end of the street for some reason. I see them going to the apartment complex next to us all the time. 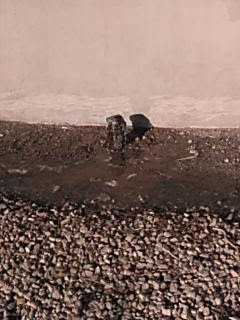 So this is the overflow drain for my building. When the main line for my building backs up, the top on this will pop off and the excess sewer water will drain right out of this on to the sidewalk and surrounding grounds.
The picture didn't really come out great so here's a video to better show you what was happening. Yes, that's toilet paper on the ground by the pipe. This is raw sewage and if you've been a reader for a while, you know this isn't the first time this has happened.
Thankfully, maintenance did come out the next day and clear the drain so it stopped leaking. But they didn't clean up any of what came out of the drain but they almost never do. They let it dry up and blow away in the wind or wash away the next time it rains.
--- 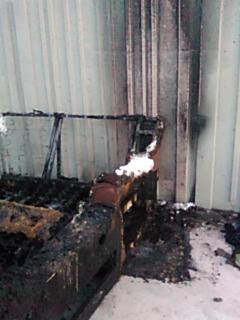 Out by where the homeless people congregate and sleep, they had pulled two couches from the trash cans and had been sleeping and sitting on them for a few days. On Monday I noticed that someone had set fire to them. 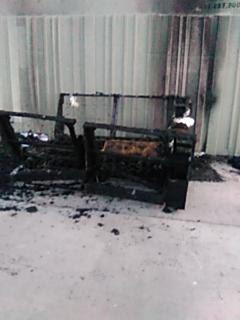 I didn't see the fire dept out here and there was no signs of water so I think it just burned until it went out. 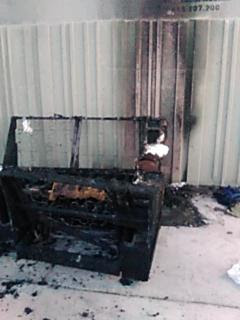 Even the wall behind it is singed. There was nothing left of the couches but the frames. I wonder if it was intentionally set or if one of the homeless people were sitting here hitting the crack pipe and accidentally set the couches on fire. I had seen a couple of different people passed out on the couches after doing drugs so it's possible it was an accident.
---
I'm sorry I didn't get around to anyone's blog for a few days. My internet and phone went out and it took a few days and several phone calls before someone finally came out and fixed it. They were supposed to be here the first day I called but never showed up.
The high this week was 79F/26C
The low this week was 41F/5C
So that's it for this week's Apartment Hell  Life! Be sure to come back next week for more.
Posted by Mary Kirkland at 12:00 AM 50 comments