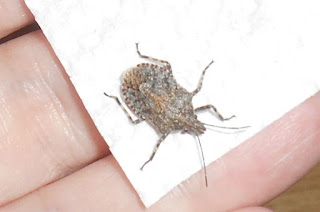 Last month Ken found this little stink bug sitting in the chair with him. At first he thought it was a piece of food but when he tried to pick it up, the thing moved back out of his fingers.

That's when he called me in the room to get the bug and set it free outside. If you aren't familiar with stink bugs, they are called that because if you squish them they release a really bad odor. So if you see one, it's better to just put their stinky butts outside. They don't bite and they don't seem to move very fast, at least this one didn't.