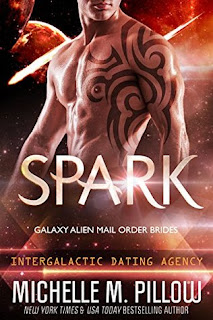 Mining ash on a remote planet where temperatures reach hellish degrees doesn't leave Kal (aka Spark) much room for dating. Lucky for this hard-working man, a new corporation Galaxy Alien Mail Order Brides is ready to help him find the girl of his dreams.

Does it really matter that he lied on his application and really isn't looking for long term, but rather some fast action? Earth women better watch out. Things are about to heat up.

Spark and his cousins come to Earth for a vacation even though they are using the Galaxy Alien Mail Order Brides to get here and that company thinks they are going to find brides but they aren't. They have been informed that Earthlings don't know about aliens from other planets so they need to do everything they can to blend in which isn't easy since they have a strange way of talking. Spark tries to entice a few women to come back to his hotel suite but the way he does it just scares most of them away until he meets Carrie.

Carrie watches the way he interacts with others and thinks he's just really innocent and doesn't understand what he's doing. He's such a big, sexy guy but he's also really fun and sweet so how was Carrie going to stop from falling for him when he has such a great personality.

Carrie is in Las Vegas as a bridesmaid in her cousins wedding. Because she's single she is paired with a groomsman to spend time with but Carrie doesn't like him. So when she meets Spark and spends time with him instead, it makes the bride a bit irritated. There's a bit of a mystery right as Carrie and Spark are getting to know one another and I wondered what was going on because it was a little strange but I liked how it ended.

I had a fun time with this story and am looking forward to reading more.