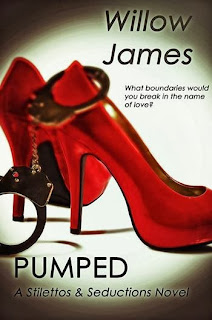 Skylar Sole is focused on work, getting her degree, and dreams of the future. Men and relationships have never been at the top of her priority list. Besides, if a girl's got a good vibrator, then why risk a broken heart? The closest thing she has to a relationship is ogling the hottie from the office park who saunters by Stilettos lingerie shop every day on his way to the deli next door. Getting a glimpse of Mr. Wall Street had become the highlight of her work days and he had become the star of her fantasies. However, one Sunday afternoon, fantasy becomes reality when Mr. Wall Street shows up at Stilettos with that sexy, lopsided grin and a tantalizing proposition.

My Review
Skylar is too busy with her work and dreams of owning her own jewelry shop one day to even think about having a relationship. That is until the man she's been ogling walks into her place of work and over hears part of an embarrassing conversation.

Never having had a real family or home because he was bounced around from one foster home to another, Griffin doesn't know what love, family and home is...but he craves it.

It was supposed to be no strings sex, an indecent proposal that they both agreed on. Things start out hot with sex in public and a little bondage, things are going as planned until Skylar gets hurt and their feelings get in the way. She has second thoughts about the whole arrangement and he doesn't have a clue what she's thinking because let's face it, men can be so clueless sometimes.

I've never met two people more terrified of love, of being hurt than these two. It was heart wrenching to read the turmoil they were putting themselves through in their own minds until they finally let their feelings be known.

If you're looking for a quick, hot read. This novella is the perfect fit.

I give this book 5 stars
Posted by Mary Kirkland at 12:00 AM 5 comments