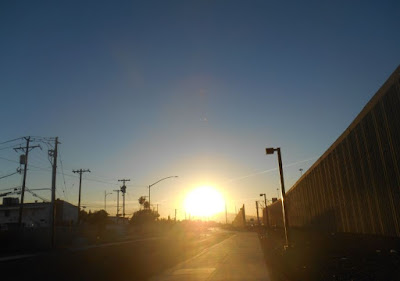 Most of this week was petty uneventful but there was one day that made me laugh. The day started out nice. I got up early, took Falcor out at 6am and even got an interesting sunrise picture.

Then later in the day Ken calls me in the bedroom because this woman who is laying on the engine of her car and the 2 guys out there were screaming at each other. When I saw her laying on the car like this I knew I had to get some pictures. And of course I took them right from my bedroom window. Why does everyone park right in front of my bedroom window? So first, why is she not wearing her shoes? Her feet are black with dirt and grease from the street. I sure hope she washes them off before tracking that into her apartment. I've never seen anyone lay on their engine while working on their car before.

They were out there for a few hours and every so often I would go back and take another picture. The tall guy always seemed to just be standing around not doing much. While the woman sat on her engine and the other guy looked like he was trying to fix something.

Maybe this is the new way of working on a car. Just lay in the engine compartment.

Then about an hour later Ken yells at me to bring my camera back in the bedroom because I have to get a picture of this. So the tall guy is still standing around and the other two are still working on the car but now... there's a guy laying on the sidewalk. Ken tells me to just wait because that guy lying there was smoking marijuana out of what looked like a homemade pipe made out of aluminum foil. Sure enough I wait a minute and he sits up, adds something to the foil pipe and puts the flame of the lighter to it and even with the window closed we could smell it because he's laying right in front of our window. When he laid back down he has the bowl part of the pipe hidden in his hand. 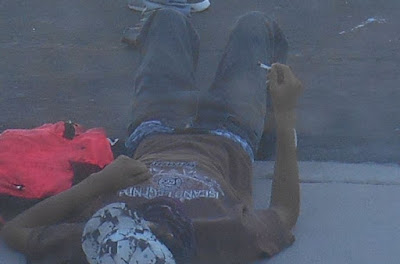 I enlarged this picture so you can see how he's holding his pipe. The bowl part of it is hidden in his hand but we saw what it looked like when he sat up to smoke it. Then he left. 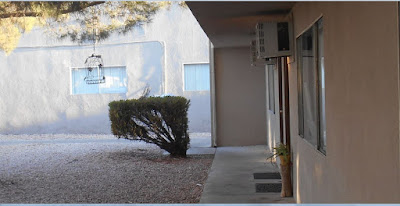 I told you about my speed freak neighbors who the guy is the manager's son last week, well this week he hung an empty bird cage from the tree in front of his apartment and put a couple of plants by his door. The bratty kids in our courtyard have knocked over his plant a half dozen times and he's screamed at them twice. He stopped the kids from throwing rocks at the empty bird cage once and one of the kids father came outside to tell him to stop yelling at his kid that if he has a problem to come talk to him. Well, that didn't go over very well at all and at one point I heard the guy tell the kids father, "Your apartment manager is my mother. Keep lipping off and I'll get you evicted." Then he went back inside and slammed his door. I knew it wouldn't be long before he said something like that. Oh and the kids knocked over his plant again this morning. lol