A To Z Blogging Challenge: K Is For Kangaroo Mouse 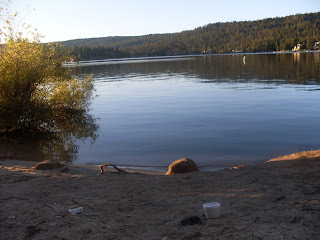 The Kangaroo Mouse is a small rodent that you can find in places like Nevada, especially if you plan an overnight fishing trip anywhere along Lake Mead. It is small like a mouse and has large back feet and a tail. So I'm going to tell you a story about an encounter my husband and brother had with these Kangaroo Mice when they went fishing one day/night.

My husband and brother both love going fishing and since we live so close to Lake Mead, that's where they usually go and for the most part their stays are quiet and uneventful...except for this time.

They go to their spot early in the day, hauling in all their gear and munchies. Set up their poles, built a fire and sat back talking and eating. As the sun set Ken, my husband said he heard some skittering around the camp site but they only had a small lantern lit and couldn't see very well around them, they just assumed it was some squirrels, birds or lizards running around.

My brother Billy, said a little while later he heard something jump into the paper bag that they had brought their bags of potato chips in and then scurry back out again. He figured it was a squirrel or something and went to light another lantern.

A little while later they said they saw something small running past them just out of view and while they were looking for it, they saw not one, not two but three more small furred creatures scurry around them and while they were trying to figure out what they were...one jumped into the potato chip bag...snagged a chip and ran off with it.

So Ken lit another lantern so they could see what it was that was running and jumping around them. He got his first good look at the little creatures when one of them jumped on his leg, stopped, looked at him and took off.

Now because Ken has been in a house with hamsters, rats and gerbils ...he didn't freak out when a small furry rodent stopped on his leg to check him out. Instead, he reached into the potato chip bag, pulled out a couple, threw a couple of them in front of him and held one in his fingers, waiting to see if anything would come and take a bite.

He didn't have to wait long until several Kangaroo Mice were running all over their camp site, picking up chips, taking a bite of the chip he held and running off only to come back and get another bite and run and run and jump all over everything...including Ken and Billy.

They said there must have been at least 25 Kangaroo Mice running around checking them out, jumping on their legs and taking potato chips. Ken kept putting potato chips and cheetos out for them and they kept coming back while my brother just watched, more interested in what fish he might catch.

Ken said this went on for most of the night until they caught their fish and started to pack up in the morning. My brother told me that when they were all packed up Ken took some chips and stuck them into small cracks and crevices that he had seen the Kangaroo Mice running in and out of and leaving some scattered around the camp site for them to find later. My brother got a real kick out of Ken doing this. Ken liked the interaction with the little rodents and I have a great story to tell.