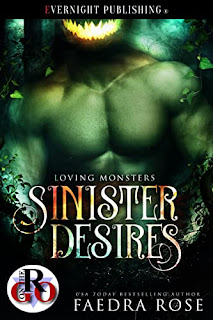 Book Description
It’s All Hallows’ Eve and Charleigh Llewellyn has just been dumped like a piece of trash after giving her ex-boyfriend a second chance over the holidays. Forced to walk home to her parents—through the woods—she is accosted by a pack of ravenous wolves.
But there are worse things than wolves lurking in the woods, and soon Charleigh finds herself indebted to a living, breathing monster. Following her most sinister desires, Charleigh feels compelled to repay the creature—soon learning the truth about his curse and much, much more…
My Review
After getting dumped on the side of the road by her ex boyfriend, Charleigh starts walking home. She doesn't want to call her family for a ride for whatever reason and would rather make the long trek home on foot. But then she thinks her time is up when she's surrounded by a pack of hungry wolves until a monster right out of a nightmare comes to her rescue.
The headless Horseman right out of the creepy Halloween story appears in front of her, having just saved her from the wolves. But he wants something in return for saving her and Charleigh is ready to give it to him. But he doesn't just want her body, he wants her to help him have offspring as well. At first I wasn't sure where this story was going or how Charleigh would fare after this monster was done with her but it turns out that they were meant for each other. After some very graphic and imaginative love scenes, we find out what the future holds for both of them.
If you like a monster romance with a little Halloween creepiness thrown in for good measure, then this will be right up you alley. It was a fun, quick read.
I give this book 4 out of 5 stars.
Disclosure: I was given an e-ARC of this book via NetGalley but all thoughts and opinions are my own.
Amazon
Posted by Mary Kirkland at 12:00 AM 24 comments