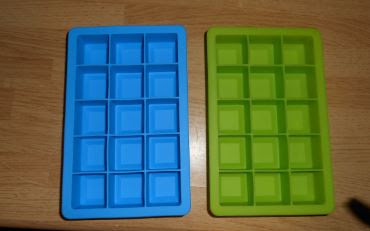 Have you ever used silicone ice cube trays?

I can't be the only one who's had a problem with them. Yes they work well but there's a weird white film on the ice when you use these. There's a weird smell and the ice takes on a weird taste as well. It doesn't happen with my plastic ice trays. I washed the trays, boiled them, washed after each use and the white film always came back. I ended up just throwing them away because it's just not worth the hassle it caused and the plastic ice trays don't cause a weird smell.

I love my silicone cooking utensils like the spoons and spatula and they don't get a weird white film on them so it must be something about putting them in the freezer. I don't know but it was weird.