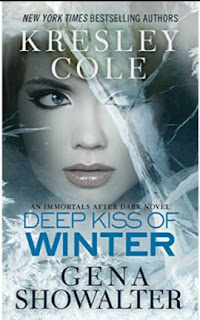 delivers a breathtaking tale of a brutal vampire soldier about to know love for the first time...and a Valkyrie aching to be touched.

Murdoch Wroth will stop at nothing to claim Daniela the Ice Maiden -- the delicate Valkyrie who makes his heart beat for the first time in three hundred years. Yet the exquisite Danii is part ice fey, and her freezing skin can't be touched by anyone but her own kind without inflicting pain beyond measure. Soon desperate for closeness, in an agony of frustration, Murdoch and Danii will do anything to have each other. Together, can they find the key that will finally allow them to slake the overwhelming desire burning between them?

puts a daring spin on a tale of huntress and hunted...and concocts a sensual chemistry that is positively explosive.

Aleaha Love can be anyone -- literally. With only skin-to-skin contact, she can change her appearance, assume any identity. Her newest identity switch has made her an AIR (alien investigation and removal) agent and sends her on a mission to capture a group of otherworldly warriors. Only she becomes the captured. Breean, a golden-skinned commander known for his iron will who is at once dangerous and soul-shatteringly seductive, threatens her new life. Because for the first time, Aleaha only wants to be herself....

Murdoch Wroth is a vampire and a soldier but when he finds Daniela, who turns out to be the only one who can make his heart beat for the first time in three hundred years, he knows he must get to know more about her.

When they first meet, he's not entirely sure what she is, only that she's in trouble and being chased by something. He helps her because he knows right away that she's his and she's hurt. But he's not entirely sure what she is and that made for a fun time at first. She's part Valkyrie and part ice fey, and she needs to be kept cool and no one can touch her without giving her burns. Of course there are so problems that arise because they can't have skin to skin contact and they want to. I thought it was fun to watch how they get around that problem.

While she is his fated mate, how are they supposed to get past the fact that they can't touch without hurting her? There's also a secondary story line going on because she's a real like Ice Queen but the guy who took over her land wants her dead. That turned out to be a really interesting story as well and I hope we hear more about that. I've now read several books in this series and I'm really liking that the vampires are finding their mates in the Valkyries.

I gave this story 5 stars

The second story in this book is by Gena Showalter. Aleaha can take on the body of anyone she touches and she finds herself as Macy who works for Air to capture aliens that are here to do harm. But on her very first mission she gets captured by Breean, an alien here with some of his people to start over in a new home.

At first I really liked this story but it soon turned into a story with two characters that I just hated. Breean thinks that just because he wants Aleaha that she should bend to his will. She's being held captive along with the people in her group and she wants to make sure her people are alright. Breean just wants what he wants and when he doesn't get his way, he takes what he wants. I didn't like him at all. He's able to soul jump which is exactly what it sounds like, his soul can leave his body, enter someone else's and make them do what he wants.

I didn't find him likable, relatable or sexy. Aleaha tries to reason with him, he's just not having it and she does the only thing she can think of to make sure her people get away. But it's at this point that she feels guilty and realizes that she loves him. WTH? He's held her captive, held her people captive, made her do things against her will but she loves him. Must be the pheromones that he gives off that makes her want him and I really don't like that when he's not a guy that I can even like. His only redeeming quality that I saw was that he didn't torture any of the people he held captive. It's only when he loses the upper hand does he even see things differently.

While this story had a lot of potential, it ended up being a story I just didn't care for with characters I didn't like.