This week I thought I'd expand on the problem I've been having with a lot of the kids in my courtyard. First off, the parents don't watch them. The parents like to make them go outside and leave them unsupervised. I've asked repeatedly if they would keep their kids away from my door and they always say sorry and call the kids away, which works for about 5 minutes. There were three different apartments that have kids who play outside unsupervised and like to stand directly in front of my door and bark or scream at my dog but one family moved out about a week ago. The only thing I can do is document it and shut my door. So here are some pictures of the little darlings who like to stand in front of my door and bark or yell at my dog. 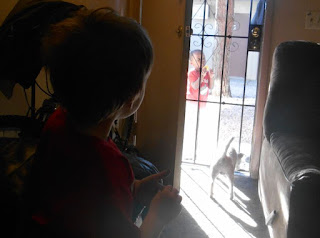 My daughter and grandson was over for a visit and they saw this kid standing in front of my door taunting Falcor. I even told the kid to get away from my door but as you can see, he just stood there. This kid was riding one of those motorized cars but every time she'd ride by my door, she would stop and scream at Falcor trying to get him to start barking. The kid in the background was throwing rocks at my screen door and was scooping up some more in this picture. I said something to his mother and she said sorry and told him not to do it again but of course he did. 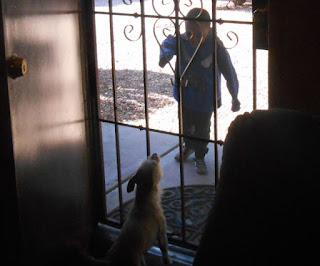 This kid comes by my door all the time when I have it open and he barks at Falcor trying to get him to bark which he is doing at this time in the picture. I told him to get away from my door but he just looks at me and says no. 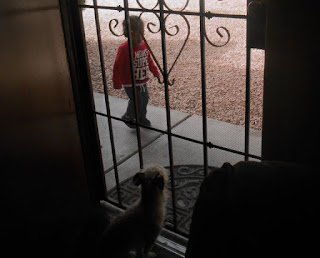 This is another little darling who was standing to the side of my door so I couldn't see her from my couch and was taunting my dog. They do it pretty much any time I have my door open on nice days and even when I say something to their parents they do nothing. 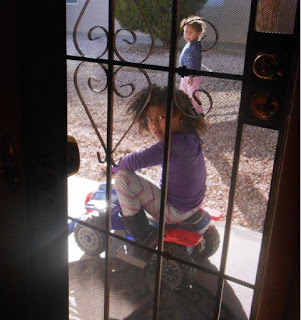 Again she was riding by, stopping to taunt Falcor so I just let him bark for a while and the parents finally yelled at the kids to get away from my door. The barking dog seems to bother some of these parents more than people coming to tell them that their kids are standing in front of peoples doors bothering them. So I let Falcor bark for a while sometimes.

I don't care that the kids are outside playing. But when they continually stand directly in front of my door and bark at my dog or yell at him trying to get him to react, it's really infuriating when their parents do nothing when they're told about it. Watch your damn kids. Ken and I along with 3 other apartments went to the manager's office and complained about the parents not watching their kids. We found out all 3 apartments were 3 months behind in their rent and 2 were getting evicted. So far one family has moved out.

And 2 nights ago we had a domestic disturbance at 10pm where the couple was actually fist fighting. They beat each other up and the cops came and the woman was taken to jail. No pictures though because I was already in my pajamas and getting ready for bed.