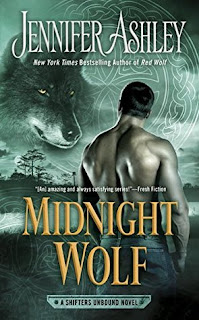 Angus Murray, bouncer for a New Orleans Shifter bar, is sent to round up an elusive, Collar-less Shifter woman, Tamsin Calloway, who is causing trouble for Shifter Bureau, and possesses information they want. If Angus refuses, he risks losing his cub. He finds Tamsin but she's slippery and not about to be rounded up quietly.

In fact, quiet is nothing Tamsin will ever be. She leads Angus on a wild chase, but he's determined to bring her in to save his son.

Can Tamsin convince Angus she's worth helping before she's locked away by Shifter Bureau, Collared, or perhaps killed?

I've been reading this series for years, ever since that first book came out and I found myself hooked on these shifters. The shifters in this series are known to the humans but shifters are kept in shifter towns and they are all collared. Well, they're supposed to be collared so they can't fight. These collars are magically made and they give the shifters a serious shock if they fight. The collars are to keep them controlled since shifters have not been given the same rights as humans have. They are seen as lesser beings but some shifters are fighting back with fake collars so it looks like they are wearing them and they won't get in trouble.

Angus is sent to find the collarless female shifter and make her take a collar but she's not going along with this easily. Tamsin has been collarless her entire life and isn't about to just give herself over to the Shifter Bureau to be collared or maybe executed for what they thought she had done.

Angus didn't really want to be there chasing her but the Shifter Bureau didn't give him a choice. When he finally does catch up to her and has a chance to talk with her, she isn't at all what he expected.

They end up on the run and end up getting help from several other shifters. While Angus and Tamsin are hiding out from the Shifter Bureau and trying to figure out what to do next, they also get closer and he let's his guard down just enough to let her get close to him. I really liked how these two start out as enemies and slowly get closer after getting to know one another. It's a slow burn romance for sure but when they do finally come together, it's so hot and they slowly figure out how much they care for one another. She has a couple of secrets and waits until she knows she can trust Angus before letting him know what they are.

They enlist the help of their friends to deal with her secret all the while trying to hide from the crazy guy from the Shifter Bureau who wants nothing more than to cut her open and find out what makes her tick.

I had a lot of fun with this book. It's filled with shifters, a sentient house, a goblin and a being from another realm. it was hard to put down once I started reading but I've loved this entire series so far so I'm really not surprised that I ended up loving this book as well.

This book releases on April 24th. If you haven't started this series, I would highly recommend it.