This week has been a crazy one. 2 people were evicted but neither of them were the two trouble maker apartments so they're still here. Then on Monday the girl from #8 ran to apartment #4 right next to me and slammed the door shut. Her boyfriend started banging on the door telling her to come out that she only gave him $5 for meth, he stood outside the liquor store and the guy never showed up. 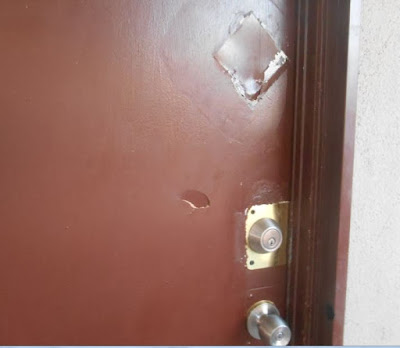 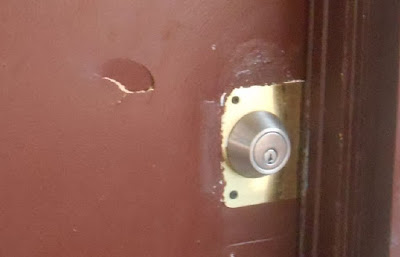 She wouldn't come out so the boyfriend kicked #4's door in and went inside and started screaming at both of them. The guy that lives there kept telling the boyfriend to leave but he wouldn't. The boyfriend kept saying, "You let her in to buy pills, so your door is not my problem."

The guy didn't have any pills for her to buy or so the boyfriend said and as the boyfriend was walking away he said, "You're a liar. Now I'm gonna have to buy pills from someone else, you stupid bitch."

I took pictures of the door the next morning after it was fixed but you can still see it was a broken mess.

A fight broke out in #2 next door to me. The boyfriend (The apartment managers son) there was screaming at his girlfriend about how he had some meth and she wasn't getting any. "Yeah, I still have some meth, but you ain't getting any of it you stupid crack hoe." He slammed the door and left while she screamed obscenities at him.

I knew the peace and quiet wouldn't last long. Oh and no, the guy with the kicked in door never called the police. Probably because he's selling pills out of his apartment...or so the boyfriend said.

Then on Wednesday I heard a fight broke out 2 buildings down in my apartment complex. The woman who lives in the apartment has her adult daughter and son living with her. While she was at work her son and the daughter's boyfriend got into a fist fight. Someone called the temporary manager (Our regular manager was in the hospital) to complain and when the manager got there either the son or the daughter's boyfriend pushed him (the manager). So when the mother got home from work she found a 3 day nuisance eviction notice on her door. And now she has to be out in 3 days.

It's been one hell of a week.

So that's it for this week's Apartment Hell  Life! Be sure to come back next week for more.
Posted by Mary Kirkland at 12:00 AM 50 comments