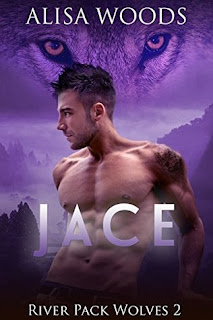 His wolf is out of control. She’s a wild thing that won’t be tamed.
Ex-Army Specialist Jace River has a lock on his bedroom door, but it’s not to keep anyone out; it’s to keep his nightmares from breaking loose. His wolf is an out-of-control killer, which means he can never risk shifting, never truly be part of his pack, and definitely never take a mate.

Piper Wilding works for the Army as a civilian, traveling the world for her work in counterintelligence and fighting the bad guys while bedding down the good ones. The best part? It keeps her far from her asshole father in Seattle, the rest of the Wilding pack, and the pressure to take a mate. Settling down isn’t her thing, and after what happened to her mother, Piper vowed she would never be tied down by magic or men again.

While Jace’s wolf keeps him Sleepless in Seattle, Piper returns home to find her missing kid brother. When she breaks into the River brothers' safehouse, sparks fly and claws come out. Her sexy skills threaten to bring out Jace’s wolf, and Jace’s good-guy hotness reminds Piper how tempting shifter men can be. They’re like fire and gasoline, and as they race to find Piper’s brother, the heat threatens to burn down all their carefully constructed walls. But falling in love has never been so dangerous—and being together means taking risks that neither might survive.

RECOMMENDED: Read Jaxson (River Pack Wolves 1) FIRST! Jace is a complete novel with HEA, the second in the River Pack Wolves trilogy (all standalone stories, but best enjoyed if you read them in order!).

Contains scorching hot shifters, alpha military heroes, and sexy spy girls. Only readers over 18 should dive into the deliciously hot world of the River brothers.

Jace served in the military but that's when things seemed to have gotten worst for him because his wolf had gone crazy and killed people. He had a hard time keeping his beast under control and had to keep locks on his bedroom door in order to keep his nightmares from becoming a reality or worst. He couldn't allow himself to shift and let the beast loose, because the beast was bigger than most other wolves and stronger and he had very little control over the beast.

He was helping his brothers catch up with Agent Smith, a guy who was kidnapping shifters and performing experiments on them.

Piper Wilding made the mistake of breaking into the River Pack safe house, the same house that Jace and a bunch of other shifters just happened to be staying at. Jace was already awake as she tried to make her way up the stairs and he had no problem chasing her down and catching her. But she was there to speak to her brother who happened to be staying there because their younger brother was missing and she needed his help finding him. Instead of just getting her brothers help, she got a lot more help.

The main story of trying to find the missing brother and find out where other missing shifters were being held and what for is a really intriguing story line. The story moves fast right along with the chaotic relationship that seems to be developing between Jace and Piper.

There's a senator who wants all shifters to have to register and that would out them all to the general public. Most people know they exist but most people don't know who they are and a lot of people don't like the thought of being around them or doing business with them.

In trying to find the missing shifters they uncover other things going on and some of the players in this are a shock to some of the characters. There are a couple of really good twists that really add to the story and made this exciting to read.