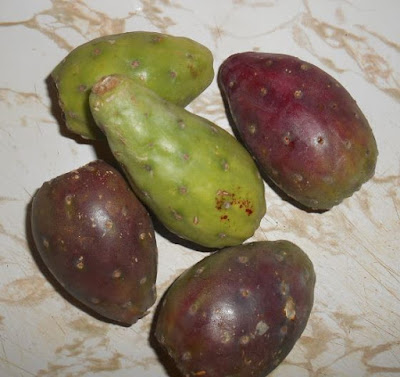 A few months back a new Mexican market opened up right next door to me. We've been Googling different fruits and vegetables and trying new things that we've never had before. These are Cactus pears. When I Googled them I found out they are from the Prickly Pear Cactus and these are the fruit from them. They were described as tasting like a cross between a watermelon and bubble gum so I had to try them. 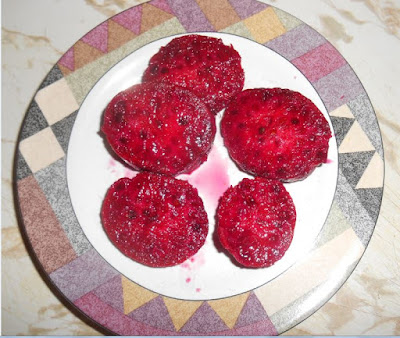 Once you peel them and cut one up *this is one of the red ones*, I saw right away that there are a lot of seeds in them. But all the articles I read said they are fine to eat and since I'm still alive, I'm guessing they were right. Yep.

They do have a watermelon texture and flavor and in the red ones I did detect a slight bubble gum flavor but it was really slight, hardly detectable at all. This is actually really good and they were only 5 of them for a $1 so the price is good. The seeds are a bit of a pain but we just swallowed them. There's a lot of them but if you don't mind that, this is a really interesting fruit and it tastes good. Ken especially liked cutting them up and adding a little whip cream to them. Hey, whip cream makes everything better. 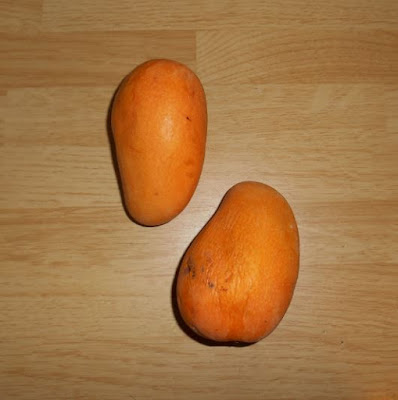 Ken saw these and brought two of them home. After Googling them I found out they are ataulfo mangoes. They are small but they taste just like the larger mangoes. I'm not a big fan of mangoes but it was interesting to try these. 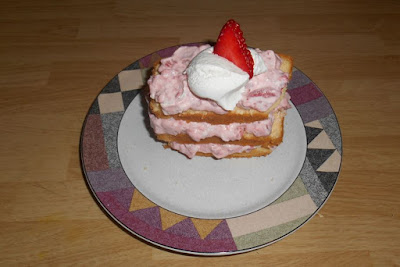