My friend Mistral Dawn has a new book out today and if you've read the others, then I know you're as excited to read this one as I am. I'm happy to have Mistral Dawn on my blog today so I'll let her tell you about her new book. 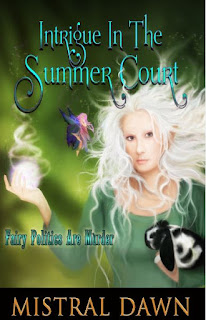 Intrigue In The Summer Court On Amazon

Intrigue In The Summer Court On Smashwords

Jillian knows something bad is going to happen! She has been a loyal adviser to the throne and friend of the queen, Briallen, for thousands of years, and now Roni and Uaine's wedding and coronation are to take place in just a couple days. The Summer Court will have a new king and queen, who, it is hoped, can repair the damage and heal the schism the late king created.
But Jillian can't shake the feeling that trouble is brewing. Many of the Summer nobles aren't happy about the changes that are taking place in the Summer Court, and many of the other Fae just aren't too sure about having a human on the throne...even if she has been blessed by the goddess. When Angelica, the leader of the Pixies, comes to her with news of a plot to murder the prince and princess, Jillian's suspicions are confirmed. Will the two of them be able to unravel this conspiracy in time to save the royal couple? Or will prejudice prevail, and the hope for peace in Fairie be lost forever?


And if you missed the first two books, get them here so you can read the series in order! :-)

Book 1: Taken By The Huntsman On Amazon

Book 2: Bound By The Summer Prince On Amazon

Want a sneak peek of Intrigue In The Summer Court?  Here you go! :-)

Jillian had a bad feeling. The Sidhe's gaze flitted from one Fae to the next, her eyes combing through the crowd assembled in the throne room of the Summer Court. Searching desperately for some clue as to the source of the threat. For days she had stood quietly behind the queen, as Briallen welcomed the dignitaries who had traveled from all over Fairie to witness the wedding and coronation of Roni and Uaine. It wasn't every day that new rulers assumed control of one of the Season Courts.

Once the young people were properly crowned, they would ascend to the throne of the Summer Court, and Briallen would step down. Never had Briallen looked more regal than she did now, as she fought through her grief to represent the Summer Court during this time of change. Jillian's heart broke for her queen, even as her trepidation built.

What Jillian found maddening was that she couldn't identify the source of her unease. Ever since her encounter with the goddess, her instincts seemed to have been heightened. At times, it seemed as though she could tell what would happen before it came to pass. She was still learning how to use this new ability, but she knew that ignoring a gift from the goddess was never wise. Right now, every instinct in her was screaming that something was wrong.

Taking a deep breath, Jillian reached into the bag that hung over her shoulder to pet the easy-going rabbit who waited inside. The feel of Patches' soft fur under her hand calmed her, as it always did. Her sweet bunny friend, sensing her disquiet, nuzzled her fingers in an attempt to reassure her. Unfortunately, despite Patches' best efforts, Jillian's feeling of foreboding persisted without abatement.

She continued to seek any hint as to what direction the peril might strike from by observing the crowd. Jillian noted that the Erlking and his Anamchara, Cassie, had finally arrived. The presence of Fairie's Huntsman gave her some comfort. A Fae would have to be bold indeed, and foolhardy, to instigate trouble in the presence of the goddess's own enforcer. Still, Jillian couldn't escape a feeling of dread.

Her attention was caught as Ankou, the king of the Winter Court, approached Briallen and nodded to the queen. Jillian marveled at how strong the king looked, despite all of his loss. A weaker Fae would have long since decided to allow themselves to fade, but Ankou appeared as solid and powerful as ever. The thought of his long eons of existence gave even Jillian, who had lived for tens of thousands of years, pause. As she observed the large male moving through the throng of Fae around the throne, her heart ached over the mantle of sorrow that surrounded him.

Shaking herself from her reverie, Jillian tried to focus on the nebulous feeling at the back of her mind and identify just what was causing it. With so many gathered to celebrate Roni and Uaine's union, a premonition of danger couldn't be dismissed. She shook her head; it was no good. Any Fae with enough status to be invited to such an important event would have long since learned to control their reactions. Perhaps if she withdrew and sought some quiet for meditation, then clarity would follow.

Just as Jillian turned away to find the desired solitude, she was approached by Angelica. As the head of the largest of the Pixie villages, the tiny Fae was, by default, the representative of the Pixies. "Greetings Jillian, you look pensive," said the tiny Fae as she hovered in front of Jillian's face on wings beating as fast as a humming bird's.

"Angelica, welcome," Jillian nodded to the winged female. "I hope the Pixies are pleased with the new trade agreements."

Angelica gave her a predatory smile. "Oh, they'll do for now. But what could be causing you to look so serious on such a happy occasion?"

"Do I look serious?" hedged Jillian. She made a mental note to control her face better, now was not the time to show weakness to outsiders.

Jillian just raised an eyebrow and looked at Angelica. The delicate Fae's tiny face betrayed nothing.

"Do you think it is only the High-Court Fae who are capable of smelling trouble in the air?" Angelica gave the Sidhe a bitter look. "We lesser-Fae have noses as sharp as yours, my lady," she added, the honorific thrown in ironically.

Jillian's second eyebrow joined the first, just below her hairline. "I never suggested that you don't, and the only one calling you 'lesser', Angelica, is you. If you have knowledge of danger brewing, then by all means, speak up."

"Ah yes, how could I have forgotten? It is a new day, with a new regime about to rise." As the Pixie spoke, she cut a contemptuous glance towards Uaine and Roni standing near the queen. "The past is now over, and we are all one Court once again. Not all of us forget centuries of injustice so easily, Jillian."

Grimacing but acknowledging the truth in the Pixie's words, Jillian said, "Ithel's behavior was inexcusable, but he is dead and his vision for the Summer Court died with him. The goddess made her judgment known, and the wise will do their best to abide by it. The past may not be forgotten, but we cannot change what was done. All we can do is make the future better."

Sighing, Angelica crossed her arms over her chest. She looked down, and then back up and cocked her head to the side. "Perhaps. We shall see. Your prince and his mate will be under close scrutiny, I hope you know that."

"Our prince and our princess are well aware that they have much work to do to heal the Court of past hurts. Is that the trouble you spoke of?"

Flipping her lilac hair over her shoulder, the Pixie gave Jillian a sly look. "No," she floated over to settle onto the larger Fae's shoulder, "I have reason to believe that the prince and the princess may not live long enough to be king and queen," she whispered into the Sidhe's ear.

Jillian gave Angelica a sharp look out of the corner of her eye. "Why would you believe such a thing?"

"There have been whisperings. You must know that Logan and Deirdra's family is not pleased with their fate."

"That is hardly a revelation," said Jillian, thinking of how the Elf female had been killed by the spell she tried to use to murder Roni.

"No, of course not, and you don't truly believe they will not retaliate, do you?"

Jillian fought to conceal how startled she was by the thought. "The goddess herself has bestowed her protection on the princess, and her blessing on the royal wedding. Are Logan and Deirdra's relatives foolish enough to challenge the goddess?"

Angelica snorted. "Not directly, of course, that would be suicide. But you know perfectly well there are always loopholes in any magic. All they need do is find one."

"Do you have specific knowledge of any such plots, or is this mere speculation?"

The Pixie gave Jillian a smug look, as she lifted off of the Sidhe's shoulder to once again hover before the larger Fae's eyes. "Why don't we go somewhere more private to discuss the matter?"

Jillian gave the Pixie a searching look and then nodded. "If you'll follow me...?" 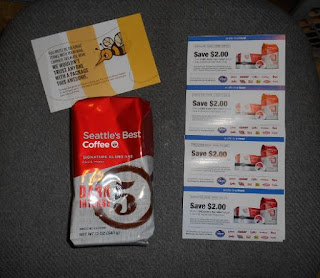 This week I received a package from BzzAgent with a bag of Seattle's Best Coffee, and coupons. 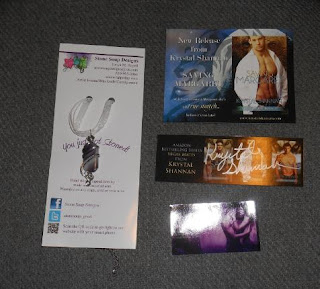 I also won this signed book mark, refrigerator Magnet and necklace in a blog contest.


Did you get anything free this week?
Posted by Mary Kirkland at 12:00 AM 16 comments