Review: The Harvest: A Tah'Narian Christmas By M.A. Church 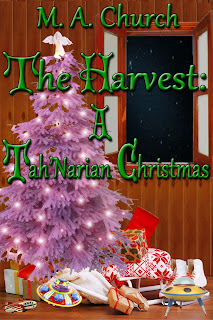 So what’s an alien to do when his mate refuses to say what’s bothering him? Why, he sends a deep space message to his mate’s mother on earth, what else?

Keyno not only learns the importance of Christmas to his chosen, he’s also shocked and confused as to why Dale hasn’t shared this with him. There is no such celebration on Tah’Nar, but that doesn’t stop Keyno from trying to bring happiness to Dale. He’s not only a starship captain, he’s also an excellent strategist. He gathers his closest friends—Doc and Gibor—and researchers the holiday.

He finds three important things about Christmas: First there is an older, heavyset male called the Santa Claus. The second is the holiday usually revolves around a tree laden with shiny baubles and lights with gifts under it. And finally they learn they’re supposed to eat way too much, then lie around and moan because they ate too much.

Humans are so odd.

These mighty warriors survived the birth of their young, surely an undertaking of this magnitude is not beyond their grasp. Hopefully Dale will be pleased with all the trouble Keyno went to. But just in case, Keyno has a very special surprise in store for his chosen for his first Tah’Narian Christmas.

Dale had been human before he was harvested from Earth and brought to be Kenyo's mate. Even though he's happy with his life now, he still misses his human family and some of the Earth customs like Christmas. Kenyo can tell that something is wrong and Dale won't tell him what's bothering him so he does the only thing he can think of, he reaches out to Dale's mother on Earth. After figuring out that Dale probably misses Christmas, he does what any loving mate would do...he tries to make Christmas come to them.

This story was sad because Dale misses his family but it was also funny because of the fact that Kenyo doesn't really understand the whole Christmas thing. But he did the best thing and invited Dale's parents to Tah'Nar to have their first alien Christmas and some of Dale's human friends, Chad had his parents there as well and they were all going to celebrate together.

I love the fact that Dale's sister Susan is there and so is her husband Evan. Evan had a hard time accepting any of the aliens and even forbade his wife from seeing Dale because of his feelings for the aliens. But after seeing how hurt she was and talking with one of the aliens and seeing that the humans who were taken are now happy, he's come around.

Reading how Susan and Dale used to do things to get into trouble when they were younger and then when their mother brought a photo album with her to show how cute Dale was as a kid, made me think of growing up with my own brother. It's small things that made me smile and made me love Keyno even more than I already did. How he acted with the kids and Dale's family was wonderful.

The kids or young as they're called there are so funny. They are playful and are always making strange cat-like sounds.

This book was free on Smashwords when I got it, it might still be.