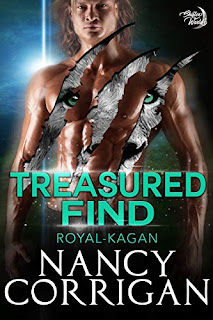 A determined shifter. A protective mother. And love…if they can survive long enough to claim their forever.

After five centuries, Rafe Alexander knows what to expect from life - boredom, broken by the occasional call from Shifter Affairs. He always accepts their plea for help. As a Royal feline shifter, he's the strongest of his kind. And he knows firsthand the dangers of the shifter world. If there's a chance he can save an innocent, he'll take whatever risk is necessary.

But the task that leads him to West Virginia changes everything. A father is dead. A shifter child is missing. And the human female connected to both tragedies is hiding a secret.

Rafe's interest in Jasmine goes far beyond the case. She's his true mate, but because of the horrors she's seen, she doesn't trust shifters. That won't stop him from winning her love. He'll soothe her fears. The killer targeting her family won't prevent him from claiming Jasmine either. Rafe will risk everything - including his life - to be the man she needs. Nothing keeps a shifter from his fated mate.

Rafe is sent to find a shifter child after her adoptive father dies. He finds that she's living with another relative and seems to be safe and healthy. But when Rafe runs into Jasmine in a bar, he's attracted to her in a way he hasn't been before. He can scent two other shifters on her but doesn't realize that they are that of her kids. These two start off really attracted to each other and acting on it really fast. She has a huge secret but then so does he. Rafe is a royal feline shifter, meaning he has 3 animals he can shift into while most other shifters only have one animal. But he doesn't tell Jazz what he is before they start seeing each other and that causes some problems.

Female shifters have been going missing for years and ending up in experimental facilities where they are tortured and experimented on. Rafe's sister has been missing for years but he's holding out hope that she's still alive somewhere. Rafe and his brothers had something awful happen in their past and an evil shifter betrayed them. That shifter is now back and out to destroy them and the kids they are now looking after. When the bad shifter finds out that Rafe is seeing Jazz, he also comes after her so she's also in danger.

There were a lot of twists and secrets in this book that made the story really interesting. The action was great and the fight scenes were brutal. The only thing that irritated me a little was the fact that it took Jazz so long to tell Rafe how she came to adopt her boys and the facts surrounding how it came about. I think that should have come out sooner.

This book introduced a lot of different characters that I'm sure will get their own stories or will pop up in subsequent books. I had a good time with this book and look forward to reading more of this series.