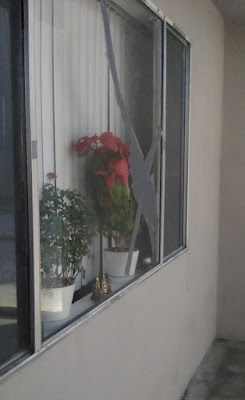 The guy who lives at the end of my building had his living room window cracked again. He put duct tape over it. He's the one with the homeless brother who sometimes sleeps in the corner outside his apartment door. His window has been broken so many times from the homeless brother who will come by and ask for money and then bust the window when he doesn't get any. The guy that lives there used to have another brother who lived with him but he passed away a couple of months back. The window was fixed by maintenance after a few days. 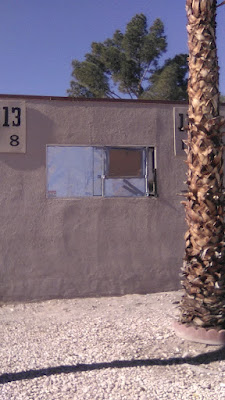 A few days later that same guy's bedroom window was busted out. I've seen the homeless brother sleeping in the corner by his door a few times. 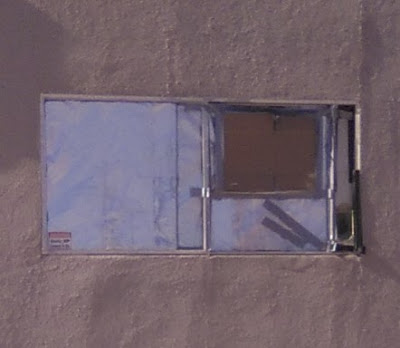 I enlarged it so you can see it better. He covers his bedroom window with aluminum foil to keep the sun out and he has a vent on the right hand side for a portable air conditioner. But where you see the cardboard and duct tape is where the glass is missing and cracked. It costs him $80 every time he has to have maintenance replace the windows and it's happened so many times.
----
Yesterday afternoon I saw someone standing outside my window which the curtains were open, so I look out and this jerk is picking up my chair that is sitting outside my door. I rushed over to the door and say, "Uh, what the hell are you doing?"
He says, "I need this chair for a little while."
I told him, "No, you can put my chair down and leave it the hell alone."
He put it down and I watched him walk away.
My grandson asked me, "Did someone just try to steal our chair?: lol Yeah kid, they did.
I am so tired of these crackheads stealing my shit. We've had a couple of packages stolen recently. You can't leave anything outside, one of my daughter's plants was even stolen.
The high this week was 64F/17C
The low this week was 33F/0 C
So that's it for this week's Apartment Hell  Life! Be sure to come back next week for more.
Posted by Mary Kirkland at 12:00 AM 46 comments