I'd like to welcome my friend, author Shelley Munro to my blog today. I'm super excited to have her here and know you'll enjoy her post. Don't forget to enter the rafflecopter for a chance to win one of the Amazon gift certificates!


A Good Night’s Sleep
Without sleep we become tall two year olds.
When I was growing up on a farm in the New Zealand countryside, the day started early. My father always climbed out of bed at an unseemly hour—prior to six a.m. He milked the cow, took care of other farm chores and then went off to shear a few hundred sheep. A hard, physical day meant he also went to bed early. Now at eighty-three, he continues with his early to rise, early to bed ritual.

As children, my brother, sister and I didn’t get to sleep in during the weekends—ever. My father didn’t believe in it. I’m glad times change, and I can please myself now.

But the funny thing is…all those early mornings and plenty of hours to sleep slipped into my mind and became a habit. In order to function well I require plenty of sleep—a good eight hours works best for me, although recently, with my hubby working lots of odd hours, I’ve been staying up a little bit later than my usual in bed by ten p.m.

I enjoy walking early and enjoying the slice of quiet before the rest of the world wakes. When it comes to writing, I tend to get more done during the morning. Yes, I’m officially a morning bird after that worm!

My nieces and nephews, on the other hand, routinely stay in bed until early afternoon, and to my mind, miss the best of the day.

Here are a few facts about sleep:
1. Most of the research done on sleep has occurred during the last twenty-five years.
2. Too little sleep isn’t good for a person and neither is too much. Around seven to eight hours is a good amount of sleep per night.
3. Humans spend around one-third of their lives asleep.

CONTEST: Answer the following questions and complete the rafflecopter to go into a draw to win a $10 Amazon gift certificate (2 x winners). Are you a morning bird or a night one? How much sleep do you get each night?
a Rafflecopter giveaway
~ * ~

One Night of Misbehavior by Shelley Munro
He wears his scars on the outside. She keeps hers safe inside.
Charlotte Dixon ignores her stepmother’s edict and, in an act of disobedience, attends one of the social events of the year—a masquerade costume ball. Charlotte’s naughtiness escalates when she dances and smooches with a sexy mystery man. The night of anonymous passion that follows makes her yearn for a different life, but the next day she’s back to her dull routine of household management.

Advertising tycoon, Ash Marlborough is about to set a private investigator on the trail of his nameless princess when she waltzes right into his place of work. Charlotte is shocked to meet her masked man in the flesh, and even more perturbed when he asks her out on a date. Despite craving another night of sexy loving, she doesn’t have time for a man, not when she wants to reinvent herself and grasp a new, improved life with both hands. But Ash knows what he wants, and he’s determined to win the heart of his princess. Let the dance of seduction commence.

Warning: Contains a conniving stepmother, selfish stepsisters, a grandmother with fairy godmother tendencies and a sexy masked man who is willing to face them all for the love of a good woman.

I Have An Evil Amount Of Page Views! 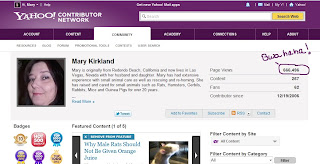 Today I looked at my Yahoo Contributor Network Profile and saw my total page views *that I circled in the picture* was at 666,496

The fact that I was on 666, 000 page views struck me as funny. Some see 666 as an evil number. I know because I used to have a phone number for many years that ended in...5666 and one year when renting a VHS video the guy asked for my phone number and address *Because that's how we checked movies out back in the dark ages* and when I told him the 5666 and then my address was 113, he started freaking out.

LOL I have to laugh about it.