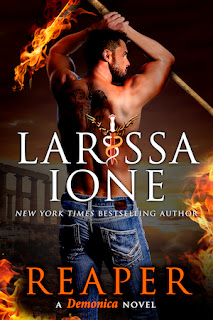 He is the Keeper of Souls. Judge, jury, and executioner. He is death personified.

He is the Grim Reaper.

A fallen angel who commands the respect of both Heaven and Hell, Azagoth has presided over his own underworld realm for thousands of years. As the overlord of evil souls, he maintains balance crucial to the existence of life on Earth and beyond. But as all the realms gear up for the prophesied End of Days, the ties that bind him to Sheoul-gra have begun to chafe.

Now, with his beloved mate and unborn child the target of an ancient enemy, Azagoth will stop at nothing to save them, even if it means breaking blood oaths and shattering age-old alliances.

Azagoth, the Grim Reaper is about to be a father, again. But his mate, Lilliana is the love of his life and their baby is one of a kind. When something goes wrong with Lilliana's pregnancy because someone poisoned her and tried to kill their baby, Azagoth will stop at nothing to make sure the person responsible pays for what they tried to do.

Lilliana is rushed to a demon hospital where Azagoth cannot go but after the doctors figure out what's wrong and contain the poison, she decides not to go back home because someone in their realm tried to kill her baby. Azagoth is mad but understands that he has to find the one responsible.

When Moloc and his minions kill a few people that they shouldn't have and kidnap Lilliana, Azagoth loses his mind and wants revenge anyway he can get it.

Moloc wants Azagoth to release Satan from his prison but he knows he can't so when Moloc tells him he only has a limited amount of time to save his mate and unborn child before he kills them, I knew things were going to get crazy and they did. I loved that so many of the characters we've met in other books were in this one as well.