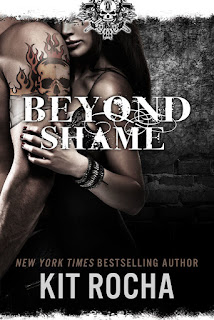 Book 1 (of 9) in the bestelling, multi-award winning BEYOND series.

All Noelle Cunningham has ever wanted is a life beyond-beyond the walls of Eden, where only the righteous are allowed to remain, and beyond her stiflingly restrictive existence as a councilman's daughter. But only ruins lie outside the City, remnants of a society destroyed by solar storms decades earlier.

The sectors surrounding Eden house the corrupt, the criminal-men like Jasper McCray, bootlegger and cage fighter. Jas clawed his way up from nothing to stand at the right hand of Sector Four's ruthless leader, and he'll defend the O'Kane gang with his life. But no fight ever prepared him for the exiled City girl who falls at his feet.

Her innocence is undeniable, but so is their intense sexual attraction, and soon they're crossing every boundary Noelle barely knew she had. But if she wants to belong to Jas, first she'll have to open herself to a dangerous world of sex, lust and violence. A world where passion is power, and freedom is found in submission.

Noelle finds herself exiled on the wrong side of the wall. She grew up privileged in Eden but now she's in a sector where she was going to have to work in order to stay safe with the O'Kane gang. She had been drugged and passed out on one of the gang members who took pity on her and brought her back to where they lived. Noelle is surprised to find them nicer and more helpful than she was led to believe that the people who lived in this place would be.

Jas is attracted to Noelle right from the beginning and like that her new best friend, Lex is helping her settle in and show her the ropes. Lex takes a liking to her and gets her a job waiting tables and lets her know that she doesn't ever have to do anything she doesn't want to. I really liked Lex.

Now let me tell you about the world this book is set in...there's sex parties, sex orgies, sex in front of other people. cage fighting and a lot of violence. There was more sex and kink in this book than the last 10 books that I read combined. But it fit, this place was built around that type of atmosphere it seemed and I could see how this would happen. On one side of the wall you have very strict rules, no sex and people who break the rules are sent to the other side of the wall where there are hardly any rules and lots of sex.

Sometimes when you have a society where the males are in charge and sex is freely given, the woman get the low end of the deal and you start to feel like it's degrading for the women in the story but I didn't get that feeling from this story at all. The women have power and the men know it. They have jobs, they help out, they are held in high regard as members of this gang, at least in this sector in this gang. Some of the other gangs and sectors might be run differently but this book showed how the O'Kane gang treated all of their members right.

This is the first book in a series and it's unlike anything I've ever read before. There are some talk of the solar storms that took place a long time ago and got them living the way they do now but the book isn't about the solar storms and not much information is given about what happened. We see how people are living now in Eden as well on the other side of the wall from Eden and it's not all good. I read a couple of reviews on other blogs for this first book and I wasn't sure I would like it but this book was free on Amazon when I got it so I took a chance on it and I'm glad I did.