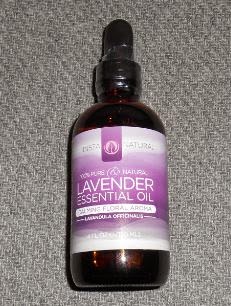 My Review
I've only used essential oils a few times and usually they come in small bottles. But this is a nice big bottle and it has a dropper so you can measure how many drops you are using. I first put a few drops on the plate of crystals I keep in my living room. I can wash the crystals off and add a new scent to them if I want to. Right away I could smell lavender in the living room and kitchen and I only used a few drops. It's been a few days and I haven't had to add more drops of this essential oil to the crystals because the scent is still so strong.

This essential oil can also be used in the bath. Just drop a few drops in the water as the tub is filling up and you have a nice scented bath water.

This oil can also be used in an oil diffuser and the scent lasts a really long time, plus a little goes a long way. You can also use this to change the plain scent of a lotion by adding a few drops to the lotion bottle and shaking. I also found that if I add a few drops to the hand soap it gives it a nice lavender scent as well.

If you'd like to buy this you can find it on Amazon.

Disclaimer: I was given this product for free in exchange for my honest opinion.

Visiting Hours: My Experience as a Visitor at Rawson Neal Psychiatric Hospital

While going to visit someone in the Rawson-Neal Psychiatric Hospital, located in Las Vegas, Nevada. I was told that visiting hours were from 7pm to 8pm each night. That's right, it's not like being in a regular hospital where a visitor can come pretty much any time during the day, you get one hour each night to visit.

You are not allowed to bring anything other than your keys into the facility or a bag of clothes for the patient. No cell phones, purses, sun glasses, cigarettes, food or drinks are allowed. When you get up to the desk to sign in, the clerk asked me what ward the patient was on and she gave me a sign in sheet with name tags for that particular ward. I had to put my name, date, and my relationship to the patient and then peel one of the stickers off and put it on my shirt. You have to wear the sticker the entire time you are there.

After everyone has signed in, someone from the ward you are going to will come and walk you there. To get to the ward I was visiting, my group went through 5 locked doors. Each door had to be opened by the person taking us. He would scan his plastic badge and punch in the number on the keypad, he would then wait to make sure everyone had gone through the first door and shut it before making his way to the next door.

When we got to the visiting room, we were asked to hand over our keys and they put them in Ziploc baggies and into a bucket that sits underneath the nurse's station until we leave. If anyone had wallets, pens, paper, or anything else they could clearly see in their pockets they had sneaked in, they were asked to remove these items as well before going into the visiting room.

The visiting room was opened the same way all the others doors were. There were two doors to this room, one we came in and one the patients came in from. Once we all took a seat, the patient door was opened and the people we were there to see were informed and came into the room. There was at least one employee from that ward in the room with us at all times. If any of the patients got out of hand, they were escorted back to their rooms. If any of the patients were on suicide watch they had someone from the ward within arms reach at all times and listened to everything that was said between patient and visitor and took notes on a clip board while in the visitor room.

At 8pm, an employee from the ward let us know that visiting time was over and the patients were escorted out through their door first. Then the visitors were let out the door they had come in through. We were handed back our keys and led back out through the doors we had come in. Going out, the person escorting us had to unlock all the doors the same way, with his badge and punching numbers into the keypad.

As we left the last door, the stickers we had on our shirts were collected and we were let out the front door leading to the driveway. It was an interesting experience and at one point I felt like I was in jail, but at least I know the patients aren't getting out before someone let's them out.
Posted by Mary Kirkland at 12:00 AM 8 comments