How to Care for an Older Hamster 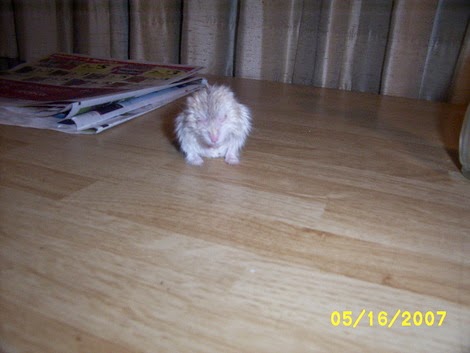 *Chance lived to be 4 years old*

Most Teddy Bear Hamsters (syrians) live between two and three years. While Chinese Dwarf Hamsters live between one and a half to three years. But like people each hamster is an individual and can live for less time or more time, depending on the care and the health of the hamster. If you buy a hamster at a Pet Store or breeder you should always ask how old it is so you will know. Keeping track of your pets age will help you to determine what's wrong and why he may be acting certain ways as he gets older.

An older hamster will often times have bald spots, be less lively and not want to run around as much, and might not clean themselves as much as they did when they were younger. Therefore their fur may look unclean, but that does not mean you should give them a bath. Bathing your hamster should be a last resort as they can become chilled and get sick and it can be stressful for them. If they do get dirty you can wet a paper towel and clean off the dirty part. Most hamsters will then clean themselves where you got them wet.

Many Dwarf hamsters may bite or nip when they are younger and then mellow out as they get older. Sometimes if a hamster lives long past what is considered normal you may have to take special care of it. Some hamsters as they get older have a hard time chewing the seed mixture. This also means they can no longer bite. My hamster still tried to bite me when I handled him but he just had no strength to do so. I have had several hamsters that when they reached an age of three or more were not able to break through the sunflower seed shells or any other hard seeds and would have died of starvation. My Vet told me I could give him canned dog or cat food, baby food and any soft foods that I eat.

The Dwarf hamster I had was four years old and didn't like the cat food, but loved Mighty Dog canned Dog Food. I also fed him soft human foods. For six months I took him out of his cage at least six times a day and fed him. You could feed your hamster right in the cage but it's easier to take them out and let them take what they want, pouch a little for later and have some out with you. That way their cage won't have old food spoiling in it either. I always left him a little food in the cage to snack on if he got hungry though and just cleaned it out and put more in several times a day that way none of it spoiled.

With an older hamster you should also move them to a single story cage and make sure the water bottle in down low enough so that they don't have to climb to get a drink. In a large cage that has tubes to climb in, an older hamster may not have the strength to climb in order to reach the water bottle. They may also fall down the tubes and hurt themselves because as they get older they lose a lot of their strength. So it's best to remove all tubes and just have one level in the cage with a couple of small houses for him to hide and sleep in.

You may have to take your older hamster to the Veterinarian's office and have him put to sleep if it looks like he is too weak to walk around or eat anything or seems like he is in pain. I took Chance to the Vet's office twice the year this picture was taken, but she told me as long as he is still eating, can walk around and seems healthy there's no need to euthanize. But it is a huge undertaking and not one to be taken lightly. I had Chance with me pretty much all the time and for 6 months he required a lot of care, which I was happy to do.

When deciding whether or not to buy a small pet you should consider what you would do if a hamster you bought needed this type of care when they got older. Are you willing to put this type of time into taking care of your hamster? If the answer is no, then maybe you shouldn't get one.