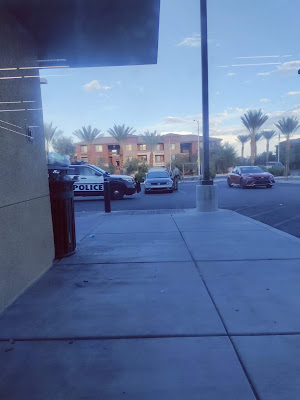 Last week the police showed up in the parking lot of where my daughter works. She sent me these pictures of what she saw. 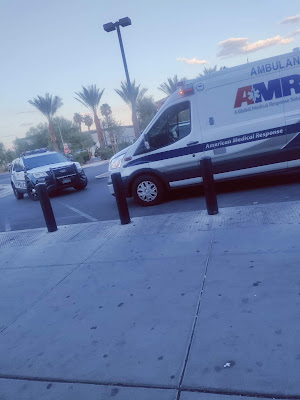 The police and an ambulance were there. 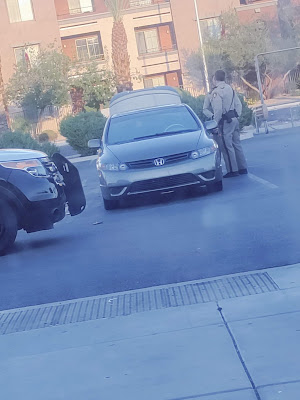 The police pulled over a woman in a car and then started searching her car. 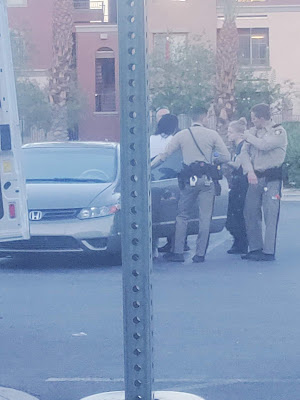 Then they helped her out of the car and she got in the ambulance and was taken to the hospital. 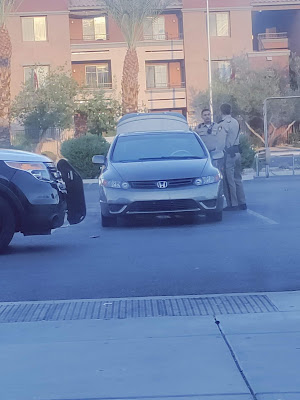 The police stayed for at least 2 hours though, searching her car. 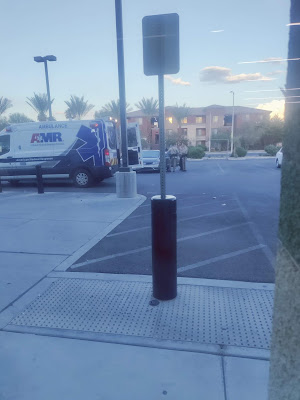 My daughter isn't sure exactly what happened but they were there for a long time. 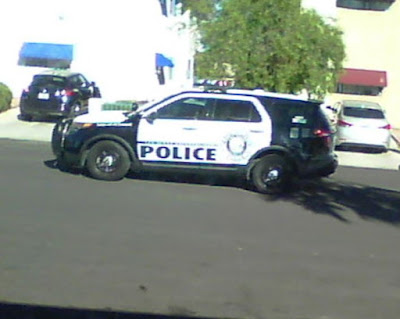 Of course the police were at the far side of my apartment complex. I snapped this picture as a second car was driving by my window and headed down to the last building in my complex. My camera doesn't take great far away pictures so I was glad I spotted this police car coming around the corner so I could get a picture of it. I don't know why they were down there.
----
On Tuesday one of my neighbors was outside having a meltdown after the sun went down. She had a table set up outside her door and was blowing up balloons and stringing them together and she walked inside her apartment for a minute and her I think 5-year-old son let the balloons go and they ended up in the tree and every once in awhile I could hear one popping and she was so mad. You left a five-year-old by a big bundle of balloons and expected him to what, not let them go? I guess you'll have to buy some more balloons. I wonder when the party is, I want cake.
---
On Friday I was taking Falcor for a walk. One of the drug addicts that I see outside all the time and says Good Morning to me all the time was out there. As I walked past him, he says good morning so I looked at him and said it back and then I realize that he has a razor blade and is slicing open his upper arm. He must have seen the look of shock on my face because he laughed and said, "I'm fine, I've blown all my veins and had to slice myself open in order to access one."
He then sticks his needle into the cut and shoots up with whatever drug was in the needle. He's already out of it and has his eyes closed by that time and I just keep walking. All this happens in just a few seconds but after Falcor does his business I have to walk past him again to get home and he's completely passed out while blood runs down his arm.
Ya know, my parents were both drug addicts so I've seen some stuff but this was a first even for me. Damn.
---
I will leave you with something good today. Here's a little video of my apartment decorated for Halloween.
The high this week was 90F/32C
The low this week was 66F/18C
So that's it for this week's Apartment Hell  Life! Be sure to come back next week for more.
Posted by Mary Kirkland at 12:00 AM 54 comments