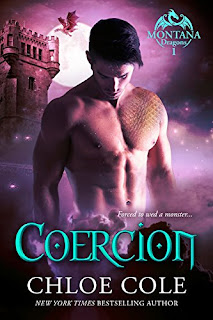 Forced to wed a dragon who wants her but will never love her...

When Willa Stone is cast aside by the alpha-wolf she’s been promised to since birth, she’s humiliated and angry, but also secretly relieved. Now, maybe she’ll have the chance to mate for love. If her power-crazed parents will just give her a little time, she’s sure to find the man of her dreams…

Dragon-shifter, Drake Blackbourne, has an itch to scratch and precious few options for an outlet. When the Stone family offers up their daughter’s hand in exchange for protection and political favors, he agrees to wed her, sight unseen. Drastic times call for drastic measures and, so long as she does her part and keeps out of his way the rest of the time, surely he can manage to bed her, no matter how plain she might be.

What he doesn’t expect is that captivating, defiant Willa will ignite a fire in him that will burn everything in its path, and turn both of their worlds upside down…

This is a Montana Wolves crossover romance, and can be read as stand-alone.

Willa figures she'll be free to make her own choices now but her parents made arrangements for her to marry a dragon shifter so they could have safety with a new pack. Her parents were pretty awful in how they arranged for Willa to meet her husband to be and how they didn't give her a choice or even talk it over with her.

By the time Willa realizes what her parents have done, they're gone and Drake is there to let her know that she is his. With no other option but to stay with Drake in his home, Willa slowly comes around to seeing that maybe being his mate isn't all that bad. Only one problem and his name is Etienne, who is another dragon shifter that seems to live somewhere really close. Dragons are solitary and males of their species are very territorial so Drake really doesn't like it when Etienne is sniffing around Willa.

Drake is so completely an alpha male and when he gets mad he's stubborn and doesn't want to listen to reason. But I really liked him and I think Willa is just what he needed. The story is really all about Drake trying to let Willa get to know him while she makes up her mind to stay with him.

Just when they seem to be getting along and getting closer, there's a misunderstanding that breaks them apart for a little while but I really like how this is resolved and how this book ended.