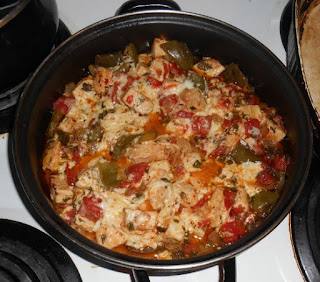 I was following a recipe I found on Facebook and sent Ken to the store for some mild Poblano peppers. Well they didn't have those and the guy in the produce section said that the Pasilla peppers were the same thing. I tell you emphatically that they are not the same thing. The Pasilla peppers were hot as hell and there was no way I could use them. So I changed the recipe to use bell peppers and took out a few things and added a few things until it didn't resemble the original recipe at all. LOL

At least it tasted good.

DIRECTIONS:    Saute onions and peppers until soft, remove from heat.  Heat oil in non-stick pan and saute chicken until meat is no longer pink.  Add all remaining ingredients except the cheese, simmer 4 minutes. Spread all of the ingredients into a baking dish and add 1/2 of the cheese and mix well. Spread remaining cheese on top. Cover and bake at 350º for about 20 minutes or until bubbly and the cheese is melted.  Serve with noodles or rice.