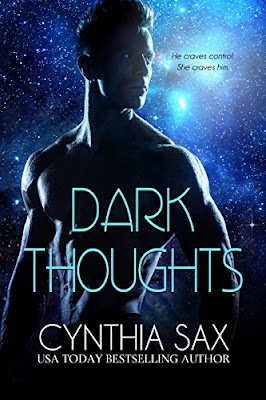 Can love redeem a monster?

The Refuge is home to some of the most violent beings in the universe. Kralj, its leader, reigns over the remote outpost with terrifying ease, ruthlessly squashing any rumors of rebellion, killing anyone who breaks his rules. Primitive, deadly, powerful, he’s a monster, scarred both on his face and his soul. He has never met a being he couldn’t control.

Until he meets her.

Dita has one mission—to kill the three targets claiming sanctuary within the Refuge. Or so she claims. For the first time in his long lifespan, Kralj isn’t certain of another being’s intentions. The tiny assassin is immune to his powers, her thoughts unreadable. He can’t predict her movements, can’t control her, can’t stop wanting her.

Dita is rare, as unique as he is, and, to keep the residents of the Refuge safe, Kralj will have to kill her. But first, he’ll touch her, taste her, show her how passionate the beast inside him can be.

Dark Thoughts is a STAND-ALONE SciFi Romance.
The hero might be tall, dark, and scarred but don’t be fooled by his appearance.
He’s truly a monster.
This story is not for readers with delicate sensibilities.

I won this ebook earlier this month from an Amazon giveaway. I was excited because it has the same title as my blog. I thought it was fitting to get this one for that reason and to read it this month since it's Halloween month and this seemed like it would be a very dark romance from the description.

Kralj is such a weird character. I wanted to refer to him as the hero but I can't think of him as that, the lead male character, yes but hero...no. He eats people. He. Eats. People. That fact should have stopped me from reading this but that just made this book have enough of a crazy edge to it that made me want to read this and I'm glad that I did. Kralj is part beast, and part human so it's really no wonder that his appetite calls for something a little different. His human half had been enhanced and now he was practically unstoppable and vicious.

He had made the refuge that he lived in and saw to it that the residents that also lived there were safe. His beast half was a Beta Taurian Shadow Beast and they mated for life. He didn't think he would ever have a mate but when his beast smelled the woman who was hiding just outside the walls of his refuge, he knew she might be his mate. He found her and she didn't seem scared of him which was strange since most everyone was.

Dita was an assassin and not afraid of Kralj, in fact she found him attractive. Their first meeting knocked him off balance but he knew he couldn't lose control or people would die. So he sent her away but she didn't stay away for long. He knows she's his mate so when she shows back up, he allows her to stay for a while. They get to know one another and it turns out she is as crazy as he is. She's a killer and so is he but both of them have hearts neither of them knew they had. They end up caring for one another and for others.

I was worried this was going to be all about his crazy killer beast side and while that did make an appearance more than once, it was also nice to see the softer side of both of them. This book surprised me quite a bit because I ended up really liking this story. There's a lot more to both of them than being killers.