Review: Bound To The Bear by Kathy Lyons 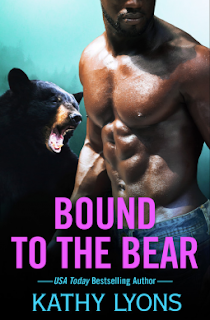 Hard-bodied and military-trained shifter Hank Coleman will always do what's best for the clan. With a mysterious virus ravaging the city and transforming anyone with shifter DNA into dangerously unstable hybrids, that means asking a human scientist for help. Hank knows that getting Dr. Cecilia Lu involved will mean exposing the shifter world and his black bear self, but it's the animal attraction that sparks between them that could be the real danger.

Cecilia trusts data and what she can see with her own two eyes. So when the hottest man she's ever met transforms into a bear right in front of her, she has no choice but to accept that shifters are real. And with hybrids attacking humans and shifters turning on their own kind, Hank and Cecilia have zero time to fight the desire that's burning hotter by the minute. But war is brewing between the shifters, and Cecilia will be forced to choose between the world of men . . . and the world of her sexy beast.

With the flu decimating many numbers of people and putting the city under quarantine, Hank reluctantly kidnaps doctor Cecilia Lu in the hopes that her expertise will help resolve the Detroit flu problem among his kind. But first he has to make her see that shifters exist which comes as quite the shock to her.

While Cecilia is combing through data, compiling more information that might help her figure out what's going on, she and Hank are fighting their attraction. I do mean fighting it. Hank wants to make sure it isn't the magic of the mating bond throwing them together so forcefully that even Cecilia feels it. But no matter what's causing the attraction, the pull is strong and neither of them want to really fight it. The fun part is while they are trying not to jump each others bones, they both come up with some funny one liners that had me giggling.

While Cecilia is trying to put the facts together and keep herself safe from some shifters that are sticking their noses where they don't belong, she and Hank find themselves in danger. But it's being put in that predicament that helps her figure out what caused the Detroit flu in the first place and helps her solve the mystery.

I love a good medical mystery and when it's paired with a PNR romance, I like it even better. This was such a fun book to read.

Disclosure: I received this book free from NetGalley in exchange for an honest review. All opinions are my own.