What Accessories and Toys Every Hamster Cage Should Have 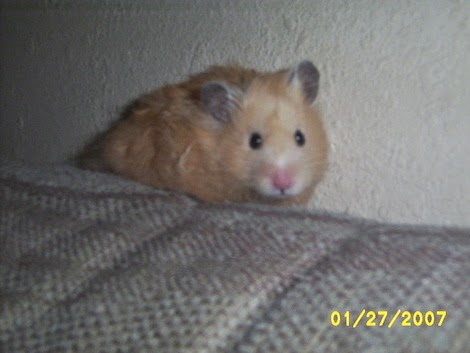 Caring for a hamster is easy if you have all the right accessories for the cage. This will make your hamster happy and a happy hamster is often a healthier hamster.

Water Bottle
There are several different types of water bottles and I've had some difficulty with the softer plastic water bottle because my hamsters would chew right though the plastic and the water would go all over the inside of the cage.

Getting either a harder plastic water bottle or a metal bottle holder will keep it from getting chewed and leaking all over the inside of the cage.

Since hamsters drink a lot of water, I have found that an 8 oz. water bottle is the right size for most hamsters. The water will usually last for two days before it needs to be refilled. Always clean the bottle and give your hamster clean fresh water.

Food Bowl
Some people don't think hamsters need a food bowl because a lot of time they will sit in their food bowls and kick the food all over the cage. But I have found while some hamsters will do this others like having their food in one place where they can go and get a nibble several times throughout the day.

Hamsters have pouches on the insides of their cheeks and you will see them stuffing food into their mouths while their cheeks get bigger and bigger, only to deposit the food they have into a corner of the cage or into their nesting box.

Hamsters constantly move their food around, but I like having a food bowl that they can sit in or at when they want to get fresh food.

Wheel
A wheel is very important because hamsters need exercise and will get bored very easily if they have nothing to do while they are in their cages.

I have found that a plastic wheel works better and they don't make as much noise as the metal ones do.

Chew Toys
Hamsters chew, they chew on everything in their cages. They have to in order to keep their teeth from over growing. If you don't have something hard for your hamster to chew on occasionally they will have teeth problems and vet bills are expensive.

There are wood blocks, honey sticks, fruit flavored wood shapes, as well as cardboard tubes you can use to hide treats in and use as chew toys.

I had one hamster who would not chew on anything I gave him. But he would continuously chew on the bars of the cage. Even after I had him out and was playing with him for more than an hour.

I finally bought some small dog biscuits and gave him one. He loved it and chewed the whole thing right down to the last little morsel. If your hamster doesn't want to chew on the wood toys you buy him, dog biscuits are a really great and cheap alternative and hamsters really seem to love them.

Nesting Box
Hamsters are nocturnal and will sleep most of the day, so they need a small box or plastic shelter in their cage where they can sleep. Most pet stores have an ample supply if plastic igloos and dens your hamster can use as a nesting box.

If your hamster likes to chew on wood, there are small wooden houses you can buy to use as a nesting box that are made so your hamster can chew on them.

Homemade nesting boxes can also be used. Anything from a tissue box to an old shoe box with a small hole cut in the sides so the hamster can get in and out can be used as a nesting box. Cardboard boxes will have to be replaced often as they will get smelly and are almost impossible to clean after a hamster has urinated on it.