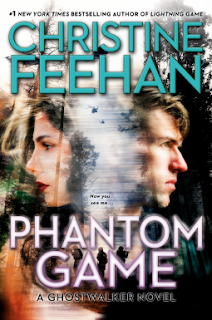 Book Description
wo predators collide with unbridled passion in this intoxicating GhostWalker novel from #1 New York Times bestselling author Christine Feehan.
Jonas “Smoke” Harper has watched his brothers find their perfect mates, never imagining he’d actually meet someone who complements every part of him—even the monster that lurks within. But his instant connection with Camellia goes far beyond wanting the intelligent, beautiful, and lethal woman in his bed. They are two parts of a whole, linked to each other and to a larger network that exists everywhere around them.
Camellia has lived on her own for a long time, relying on her unique psychic abilities to keep her safe. She knows that Jonas was literally made for her, and that makes their addictive connection more dangerous than a thousand enhanced super soldiers. Once the larger threat looming over them is dealt with she’s going to get far away as fast as she can. Life has taught her that the only one she can truly trust is herself.
Jonas can sense Camellia is going to run—and the hunter inside doesn’t want to let go. Not when he knows how good they’ll be together. So he’ll just have to use all of his considerable skills to convince her to stay....
My Review
The GhostWalkers were men who had volunteered to be enhanced psychically so they would be more use to their country. But Dr. Peter Whitney also performed experimental gene coding on them without their consent or knowledge. But because of his connections and the government who wanted his enhanced soldiers, he was untouchable and continues to experiment on people. Whitney had also experimented on girls and used in vitro to make designer babies he could experiment on. he ended up making enhanced females that were the other half of a pair to some of the enhanced men he had experimented on. The enhanced pheromones in the pair made them attracted to each other.
Jonas and two of the other members of his GhostWalker team had headed into the forest because one of them had a gut feeling something was off in that direction. But Jonas came across more than he could have imagined. An enhanced female who had escaped Whitney's experiments had run and camouflaged herself in the dense mountains. Only another GhostWalker or enhanced person who had very specific gifts would have been able to find her and Jonas ended up being one of those people.
Camellia had been hiding for a while and she knew that GhostWalkers and some of their wives had made their home in a building not far from her. But they had no idea she was there and she had no plans to make herself known to them. So when Jonas was able to find her house and came to talk to her, she wasn't wanting to have anything to do with him but she knew he wasn't going to leave until she did.
At first Camellia had thought that Whitney had sent the GhostWalker team to find her and bring her back to the labs and she didn't trust anything Jonas said. But then they both realized they were a bonded pair and that attraction made her want to talk with him. They could both hear lies so while neither of them trusted the other at first, after talking a little and hearing no lies, they sat down and talked a bit more. Jonas had thought the feeling that he and his team were feeling might have been Camellia but she felt the dangerous threat as well so they knew it wasn't her.
When she, Jonas and his team realize there are other men on the mountain, they go scout to see who they are. They quickly realize that these men are the reason they all have been having bad feelings about a dangerous threat. She helps Jonas and his team find out who they are and why they are there and it's bad news, really bad news. More teams of soldiers are on the way to attack the building where Jonas and his team and families are living. When they find out why the teams of soldiers are sent they think they have it all figured out but secrets are revealed, feelings are hurt and the team realizes they've been betrayed by someone close to them. But then there's a pretty good twist and more questions are raised. All the while Camellia is getting to know Jonas better and they are falling for each other. She is much more than she seems and is able to help out Jonas and his team during the attacks that happen. The action in this book was great.
I've really been loving liking this series but this was definitely one of the best books in the series so far.
I give this book 5 out of 5 stars.
Disclosure: I was given an e-ARC of this book via NetGalley but all thoughts and opinions are my own.
Posted by Mary Kirkland at 12:00 AM 21 comments