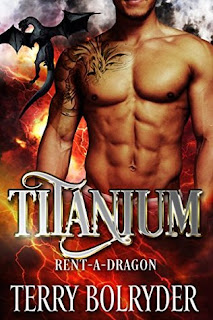 Unless you're the woman Titus Kroll just fell madly in love with. As a decisive, capable, and newly awakened metal dragon, Titus is used to seeing what he wants and going after it. Right now that's Bree Durell, a sweet, curvy woman who needs help with her house badly and can't afford to pay. Still, his heart says she's his mate, and no matter the price, he's ready to serve her every need, whether that's repairing her home, healing her heart, or restoring her trust.

Bree Durell isn't looking for romance. She has enough on her plate with a crazed stalker, a clumsy but adorable dog, and a house that's falling apart around her and too expensive to repair. Though there is instant attraction when she sees Titus in all his tall, blue-eyed, muscular glory at Rent-A-Dragon, she's sure she can't afford his fee. So when Titus shows up on her doorstep with an offer she can't refuse, she vows she will only keep things professional, no matter how wickedly talented he might be with his hands.

As Titus and Bree work in close quarters, sharing a home and a few steamy encounters, there are big threats circling. From an ancient friend-turned-enemy, to rogue dragons obsessed with vengeance, Titus is going to have his hands full if he wants to protect his newly-built life.

Bree's house is in serious need of repair but before she can even get a quote from Rant A Dragon, she leaves thinking that she could never afford them. Titus shows up at her door later and makes her a deal. He'll fix her house if she'll do something for him. Of course she doesn't trust him at first but she agree's and he starts repairing her home.

Things are going really good and then the rude neighbor complains about her dog. Another thing that I really liked about this series is all the women had pets and the pets instantly liked the dragons which the women really liked. Having pets in books is always nice to see and I loved Biff, he's a big, clumsy Great Dane.

Bree has an ex boss that's obsessed with her and still bothers her. She's afraid that if she doesn't get her house fixed up that she'll be kicked out because it's not up to code. Good thing that Titus is good with his hands and likes to fix things. But she's been hurt by men who she thought were her friends and isn't ready to trust Titus even though she's lusting after his body.

There's another story going on with other dragons and if you have been reading this series then you know there's another group of dragons that have it out for the metal dragons. There's a few really exciting fight scenes and the action in this book is really good...these dragons like to fight and keep their mates safe. So while most of the mystery as to why this other band of dragons has had it out for the metal dragons is realized, the reason that another dragon has been setting all of them up to hate each other was not concluded and this was the last book in the Rent A Dragon series. There's going to be another series of books with another band of dragons and I'm sure that the mystery will continue with those books but I would have liked to see that storyline come to a conclusion.