Review: The Duke with the Dragon Tattoo by Kerrigan Byrne 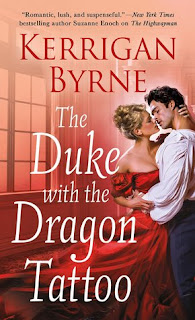 The bravest of heroes. The brashest of rebels. The boldest of lovers. These are the men who risk their hearts and their souls—for the passionate women who dare to love them…

He is known only as The Rook. A man with no name, no past, no memories. He awakens in a mass grave, a magnificent dragon tattoo on his muscled forearm the sole clue to his mysterious origins. His only hope for survival—and salvation—lies in the deep, fiery eyes of the beautiful stranger who finds him. Who nurses him back to health. And who calms the restless demons in his soul…

Lorelei will never forget the night she rescued the broken dark angel in the woods, a devilishly handsome man who haunts her dreams to this day. Crippled as a child, she devoted herself to healing the poor tortured man. And when he left, he took a piece of her heart with him. Now, after all these years, The Rook has returned. Like a phantom, he sweeps back into her life and avenges those who wronged her. But can she trust a man who’s been branded a rebel, a thief, and a killer? And can she trust herself to resist him when he takes her in his arms?

I won this book in a blog contest and even though I don't usually read historicals that much anymore, I decided I wanted to read this one after reading the blurb...so I'm glad I won it.

Lorelei helps save The Rook when she is but a teenager and she finds herself drawn to him but he has no memories of his past of how he came to be where she found him. Lorelei is disabled and mostly at the mercy of her horrible older brother. Good grief I hated her brother so much. He's an ass and gambles their money away then tries to marry her off to someone she doesn't want to marry.

The Rook or Ash promised to come back for Lorelei but when years passed and he never showed back up, she figured he just forgot about her but that wasn't true. Before she can be married off Ash comes back for her but he's not the same man that she knew. He has a bad reputation and is not a man easy to get along with. At first she's scared of him but as time passes she can see the boy she once knew and holds out hope that he's still in there somewhere.

Lorelei has no idea what happened to him to change him so drastically but that story is a sad one and I won't say more about it because I don't want to give too much away but this book made me sad. I think that's why I stopped reading historicals, a lot of times they have this sad or shocking aspect to them that makes you just want to cry for these people and this was such a story.

This is the first book by this author that I've read and the first historical that I've read in quite a while but this story was a real page turner and it kept me reading until way past my bedtime because it was so hard to put down.