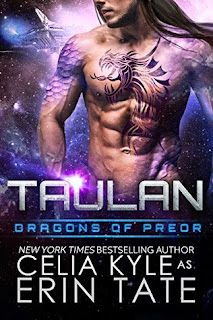 He wants to return to Preor and she wants a job, but you don’t always get what you want.

Lana Cooper is down to her last hundred dollars, has no job, and her clunker of a car has finally clunked out. How has her life become such a cluster of horribleness? Oh, right. A guy. Only she doesn’t get a chance to beg for a job. Nope, one walk along the beach changes everything. Oh, she has a job now… as the mate to a hot, hunky Preor dragon male.

Taulan sen Pavon is anxious to return to his home on Preor. Yes, he’d journeyed to Earth in hopes of finding a human mate, but now… Now he would like to heal in the privacy of his aerie. Wings destroyed and body damaged by an explosion, he has no desire to watch others find joy with their mates while he remains unworthy and alone on a ship filled with thousands. But then he finds Lana. Lana with her alluring smile, sparkling eyes, luscious body, and whose mere presence initiates the Knowing.

Can he live long enough to claim her? Can she see past her father’s prejudice to love him? Both questions are pointless because there are still Preor who despise the joining of humans and dragons. They will stop at nothing to drive a wedge between the races. Including murder.

This is book 2 in the Dragons of Preor series. In the first book the Preor come to Earth to find their mates. They are alien dragon shifters, Earth's government made an agreement with them and now they are allowed to come here to find mates with the willing human females.

Not everyone was for this arrangement because they wanted to keep their Preor blood pure without human DNA introduced to their species line but without the human females there was a good chance that their race would die out since they didn't have enough Preor females for each male. Some males went hundreds of years without finding his mate which was not a good thing.

Fighting breaks out and Taulan is hurt. He doesn't think he's worthy of a mate now because of his injuries and wants to go back to Preor.

Lana who is down on her luck and living out of her car applies for a job at the alien compound and goes for a job interview. She's changed her name and is hiding from someone she hopes to never see again. But before the interview happens she runs to save a child she thinks is in harms way and at the same time Taulan see's her and the knowing rushes over both of them.

They find out that she isn't who she says she is and she ends up having to go away with Taulan when he claims her as his.

These two don't start off great because they both have a lot of baggage but as they get to know each other things do start to pick up and I ended up really liking both of them. The fact that there are still Preors that don't want to see their people and Earthlings mated and having offspring made me sad. I know that it would happen if aliens ever do visit, there would be humans that wanted nothing to do with them too.

I really like the world and characters that this series is bringing about. I've only read 2 of the books so far but I like how the books are showing the Preors culture and how they adapt to human culture through the knowing when they find a mate. I'm looking forward to reading more of this series.