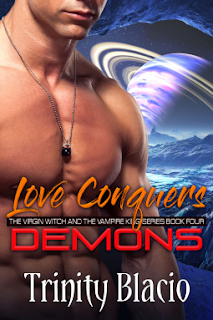 Normal people have nightmares and wake up from them to go about their daily routine, but not Claire Marlow. Her life had been a living hell until that one summer she had spent with her grandparents in New Orleans. That’s when she met three of the most handsome men she’d ever seen who not only took her breath away, but made her wolf do a jig inside her. For that one week, running in the sand with the moonlight upon them, Claire had found her escape from the nightmares, or so she thought.

Bryce Marlow was an alpha and always knew he’d be the dominant one in his family unit. Claiming Ivan and Felix had been challenging to say the least, but when the three of them had seen Claire on the beach that night they all knew they were looking at their heart and soul. However, one look into those haunting eyes and the three of them realized that whatever time it took, they would erase those nightmares to replace them with hope and their love.

Claire had a horrible teenage life when she found out what her step father was up to. He made her life a complete nightmare until she met her mates and moved away. It wasn't until recently that she told her mates what her mother and step father had done to her and how scared she was that they would find her again.

Then all at once, she finds her biological father who never knew about her and some monster straight out of a nightmare comes for her. Plus her mother is up to her old tricks, making trouble for her once again.

Her brothers, mates and her bio father and his family all rally around her in an attempt to keep the monster from getting to her. I really liked the interaction between her and her mates. They are very protective of her and I really liked how they all got along.

Her father is really interesting and I liked finding out more about him. There are a lot of characters in this book and at times it felt like there were too many people to keep track of. The story did seem to slow down in some parts but then would speed back up and keep my attention for a while.