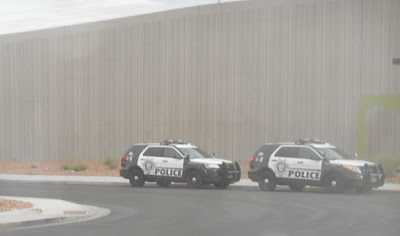 On Tuesday I opened my door to take Falcor out an there were 4 police officers at the apartment right across from me. So when I went outside I took a picture of the cop cars near the sound wall. I don't know what they were talking to the guy that lives there for but they stayed for about 20 minutes and then left. The guy is quiet most times so I have no idea what the police were there for. 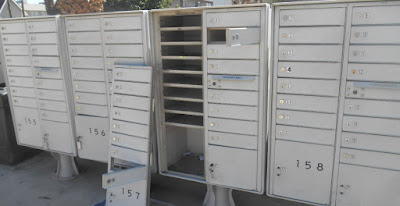 On Friday night I took the dog for a walk at 4am and there was some guy banging on the drug dealers door 4 doors down from me. Ken got up and stood outside to make sure I was alright because this guy started banging on a bunch of the doors and woke a bunch of people up. When the drug dealers wouldn't answer their door, he started yelling that he was going to kill them. On his way out he stopped in front of Ken and just stood there staring at him for a second. He passed me on the sidewalk and when he was just a few feet from me he started screaming at no one in particular and I couldn't make out what he was saying.
That same night someone broke into a bunch of the mailboxes for our apartment complex. Our neighbor came over in the morning and told us to go check our mailbox to make sure it wasn't one of the ones that were broken into. Thankfully it wasn't. I told you guys a few years ago that my mailbox had gotten messed up and it's really hard to open and close and I put in a work order for the usps to fix it. They never did even though I called several times so now I'm wondering how long it will take for this to get fixed.
-----
Life Update:
Ken went to have eye surgery on Monday. They said it could be a couple of things but wouldn't know for sure until they got int here. He came through the surgery fine. On Tuesday he went back in for a check up and was told the bad news. It was retinitis and the surgery didn't work. There's nothing more they can do for that and so he's permanently blind in his right eye. Not good news this week but he's doing alright. I just feel bad because so much more keeps getting piled on him all the time it seems. He starts radiation treatments on Monday for the 11 brain lesions he has. He goes 5 days a week for 2 weeks. 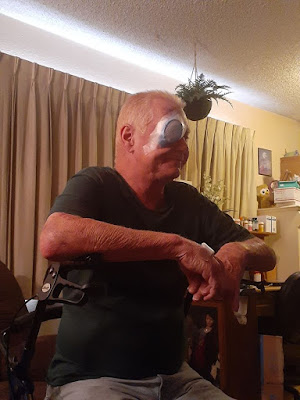 *Ken with his eye patch after surgery.* 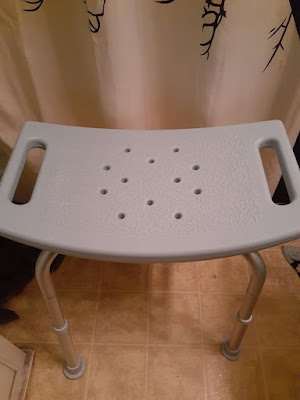 One very nice thing that happened this week though was my daughter mentioned on her fb page that I was getting the run around with the doctor and the DME place to get Ken a shower chair. I've been waiting 3 months for them to deliver it and was just going to buy one at this point. One of my daughter's old teachers from high school saw her post and bought this shower chair and brought it over to us. I thought that was so nice of him.
So that's it for this week's Apartment Hell  Life! Be sure to come back next week for more.
Posted by Mary Kirkland at 12:00 AM 47 comments