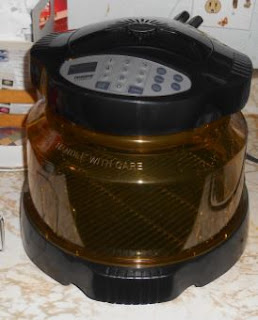 If you are friends with me on Facebook you might have seen my post last week about one of my neighbors giving me a brand new Nuwave Oven because she ordered one and they sent her one for free. I was so excited to try this out and Ken has been wanting one for a while. 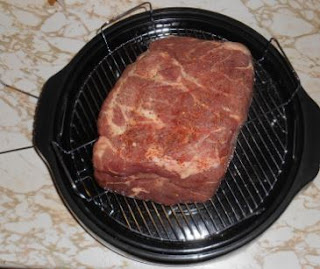 We had a 6.5lb pork roast in the freezer so we thawed it out and after reading the directions, it said I should cook a 3-7lb pork roast for 17-19 minutes on each side. So I did that and checked the roast. It was dry like beef jerky on the outside and completely raw on the inside. In order for us to eat dinner, I had to cut the ends off because they were done and put the roast back in the Nuwave Oven to continue cooking. 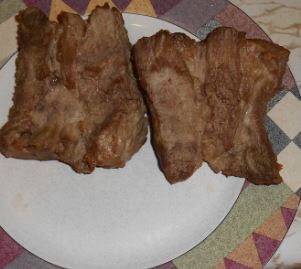 Only the ends of the roast were done after 40 minutes of cooking so we had dinner but the roast didn't have that baked in the oven taste and the outside was so dry and tough. It took a total of 2 hours in this oven to get the meat cooked and even then it was still a bit pink in the middle.

This oven is supposed to cut cooking times in half! But I could have cooked this roast in the regular oven in 90 minutes and it would have been fall off the bone done.

I'm one of those people that if I try something and it doesn't go right the first time, I'm not likely to try it again. So I gave the oven to my daughter because I knew I wouldn't use it again. My first thought was to throw the entire things into the trash but Ken is the voice of reason and he stopped me. lol

So this was a huge flop, fail, dud, disaster.

I wouldn't recommend this oven at all.